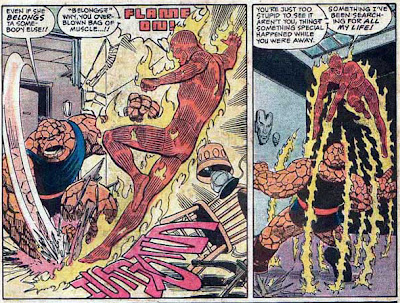 This comic isn't just 'Virgin Territory'. Fantastic Four #277 is the one comic I can point to more than any other, that made me a comic fan. It has 'Moments In Cool', Thing, Mephisto, Dr Strange, and Dire Wraiths. Yet written and drawn by John Byrne (inks by Jerry Ordway), it didn't need any of them, it had me right from the cover. While it also bares compositional similarities to Fantastic Four #1, it took me awhile to get it was a split scene image. Even now I think a half Mephisto, half Dire Wraith would be an awesome foe - power and brute strength!

Right from the first page, that 50/50 split continues. The top half of every page dedicated to The Thing's return from Marvel's Secret Wars. The lower tier features Dr Strange trailing evil's scent to the bodies of Reed, Sue and Franklin, whose souls are hostage in Mephisto's realm!

This issue was my first whack of Marvel not talking down to it's audiences. I had seen The Fantastic Four cartoon with H.E.R.B.I.E., in Secret Wars and in picture books (like the one I featured here), but in this, my first Fantastic Four comic Byrne was taking them to a whole new level. The Thing, having reevaluated his life off-planet goes to tell Alicia their relationship is over, only when he knocks on the door, a half-naked Johnny Storm answers! 'WTF' was born right here.

Two super-hero best mates and one had stolen the others girlfriend? My jaw was on the floor. While you could see how love had bloomed in his absence, you still had to feel sorry for Ben. Thing was my favourite Marvel character by a country mile, and Byrne made this issue even more emotive for him, by shading the hero's rock covered skin in a way you could almost make out the man inside.

As the Wraith World appears and triggers tremors across the city, She-Hulk hears of Thing's return, and fears her time as 'fill-in' is at an end. Then, thinking his luck might be changing, Benjamin J. Grimm stumbles across a damsel in distress, only she turns out to a Dire Wraith wanting to steal his body - the guy can't get a break!

Just as honest in telling Reed and Sue's story, the powerless couple's torture scenes at the hands of Mephisto, seemed like something out of A Nightmare on Elm Street! Empowered by the Wraith chaos on earth, Mephisto fully utilises the pain of his new 'toys' to his own satisfaction. 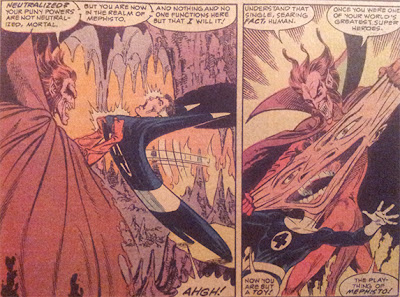 As a burst of light signals Dr Strange's arrival, Reed realises during the ensuing battle that the Lord of Hades is afraid of the imprisoned Franklin. My first 'meeting' with Sue's son and he's taking on the devil?! Actually, taking on is a bit of an over statement. Released, the battle is pretty one sided, free of the power inhibitors that lie within his body, there's not much Franklin's spirit can't do. Talk about epic.

The coolest panel of the issue below, shows even in hell Reed is still a bossy bastard. Years on, I still draw the hands of magicians, like J.B. draws Dr Strange's here. 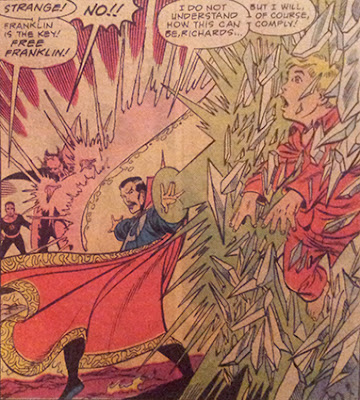 While I have brought many an issue of The Fantastic Four prior to this since, this issue is still king. This is where it all began and the issue I re-read more often than it's pull-box companions (and if truth be told, I always stop to check and see if I can still do the Newtons Cookies maze advert as well).

By combining drama, the supernatural, super-heroics and heartfelt human feelings, John Byrne created the ultimate reason why regardless of who is writing Doom Patrol, Legion of Super-Heroes or the JLA, my favourite super-team will always be the one within 'The World's Greatest Comic Magazine'.