A ROGUE AFFAIR: New Flash TV Series To Be Fired From Arrow's Quiver

As TV smash Arrow seemingly continues to build it's Suicide Squad, the CW have tasked that show's creators with proving lightning can strike twice, by developing a spin-off series based on The Flash. 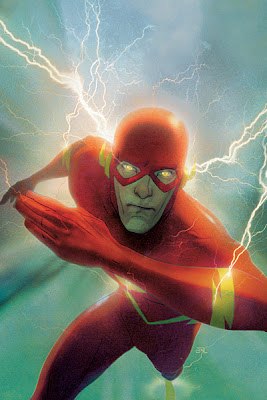 Starring Barry Allen, the brighter and more super-heroic show will be co-penned by acclaimed Flash comic writer Geoff Johns, who states the hero will be called 'Flash' on screen, with the iconic suit and powers to match.

Launched from episodes 8, 9 and 20 of the next series of Arrow (20 being the spin-off pilot for the Scarlet Speedster), all three episodes will be written by Johns, along with Arrow's Greg Berlanti and Andrew Kreisberg - delivering a new look to how the hero's speed has been shown before.

Summarising the character's appeal, Kreisberg told THR "The fact he has superpowers, there's something more relatable about Barry among the Big Seven of the Justice League. He got his powers by accident; he's not a god, he's not an alien … his reactions to that feel very … human and grounded."

While casting is now underway for a man to fill the golden boots, personally speaking, the early 90's John Wesley Shipp starring Flash TV series is one of my biggest addictions. Hopefully Shipp can be worked into this cast in some way, even if it is as one of The Flash's unbeatable rogues gallery - Captain Cold perhaps?