When I was a youngster hip-deep in comics, I knew I liked The Fantastic Four. I just didn't like their co-creator Jack Kirby. The he was called 'The King', the more it puzzled me. I'd look at his work and think 'What am I missing? These dots? These arched-legged poses?' Was I the only one on Earth adding two and two together and getting six?

It seems not. Through this site and life in general, I've met other people who rode the same train of thought. Like Graeme McMillan, a writer for the world's greatest red-bordered magazine, TIME, who says he is not sure what clicked for him first as to why Kirby is so great - I'm not sure either, I'm just glad that it did. 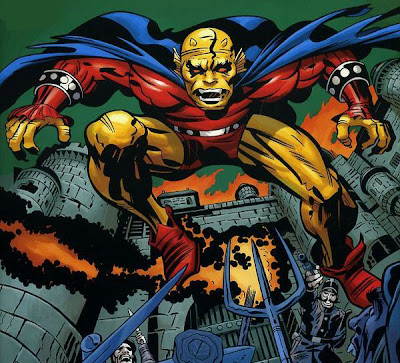 Right now, if I had to pick JUST TWO of Kirby's aspects as 'Why', I'd say awareness of his volume of quality creations (from Etrigan above to the Silver Surfer), and his stylistic use of black. Putting his realisation a lot more eloquently than I, Graeme has written an article for his globally prestigious employer, and told the world "Jack Kirby is The Most Important Artist You Might Not Have Heard Of".

Stating "At his peak, Kirby created popular culture as we know it today" I recommend you give it a read if you can. Touching on everything from the New Gods providing inspiration for Star Wars to the 'Kirby Krackle' and the way he drew all that technology the way he did, it really shows how Kirby stands the test of TIME.