CRYING SHAME: Over £30,000 Worth Of Comics Unknowingly Turned Into Paper Man

Picture this; one day you are walking along, just thinking how great life is, when low and behold in the dumpster in front of you is a giant stack of comics! Now you and I would instantly phone up the boss and take tomorrow off, before we even looked at what issues they were, and stocked up on enough M&M's to have a sit-in comic reading marathon, but not Andrew Vickers. 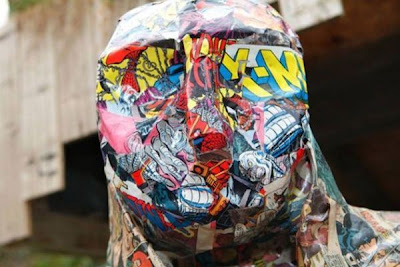 Committing as much of a crime against comicdom as the person who threw them away in the first place, Andrew assumed they were worthless, and created a paper mache sculpture dubbed 'Paperboy'. Only what he inadvertently stuck to his chicken wire frame was a collection of vintage comic books, seven of which have a non-mint condition value of £30,000 - including Avengers #1 from 1963.

According to comic store owner Steve Eyre, who visited the Heroes exhibition in Sheffield and discovered the tragedy “It would have been cheaper for Andrew to make this out of Italian marble because of the raw materials that have gone into it. I could have sold for a lot more than he is going to sell this statue for.” 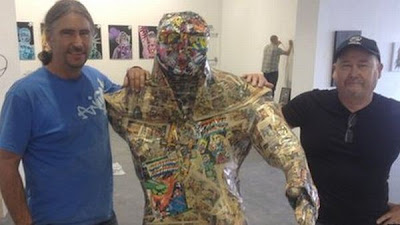 Said Andrew to the BBC "I really love the idea of me creating something out of such expensive things that's worth less. I think it's brilliant." I can't comment.