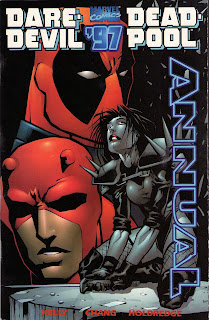 If we want to talk unfairness in creator rights, let Joe Kelly have the phone. He's the guy who really gave Deadpool wings, redefining the 'Merc with a mouth' forever more, yet his 'creation' of sorts lies solely credited to actual creators, Rob Liefeld and (the sometimes omitted) Fabian Nicieza!

Sure heaps of creators do great work the kids of others, but when Kelly brings the 'Pool onstage in this annual looking for his jambes with feet and the thin worn spots in the butt, you know having Joe back on his 'baby' is as comfy as, well, those pre-mentioned jambes.

Sprung by Deadpool from the mental hospital her ex Daredevil left her in, Typhoid Mary finds herself victim yet again, only this accident unlocks memories that convince her the Man Without Fear is to blame for the horror of her life. Taking off to the Big Apple after the man 'responsible', Deadpool casually follows suit to pick up the pieces. Only Wade runs into a nemeses of his own; NYC cab drivers cheating fares… 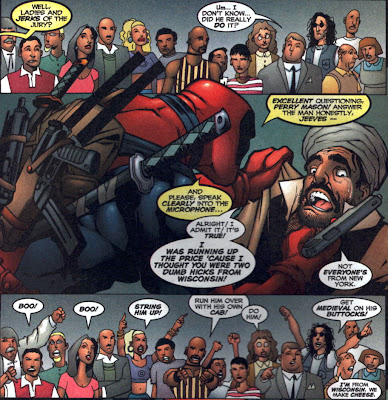 Trying to help the plight of his beloved, Deadpool dressed as a singing telegram, hijacks Matt Murdock's buddy Foggy Nelson via poetry in order to bring Daredevil into the mix. As the red-men take off, Foggy and Wade's mate Weasel realise being 'wingmen to super-heroes' makes them decent drinking buddies to boot.

Thinking his ground-meat face has come up with the ultimate plan in letting Typhoid confront Daredevil to process her turmoil, Deadpool is thrown for a loop when he realises Typhoid's extended the plan, and is now taking out any judge or doctor that put her wrong.

With sides no longer what they seemed, it isn't long before both men find themselves before the most dangerous pair of heels in comics. 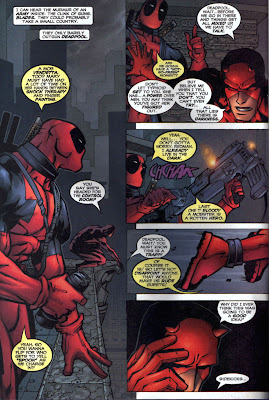 As Daredevil becomes mortified over his original connection with Typhoid, the words that then flow out his mouth send the multi-personna menace that stole both men's hearts into a rage she never expected. Leading Mary and her horn-headed ex to 'counsel' it out - with Deadpool the psychologist of the session!

With all three after redemption, the victory may not go to who you're thinking.

Daredevil as the 'straight man' of sorts, surprisingly suits being partnered up with Wade Wilson. As Deadpool drops pop-culture references on everything from The Smurfs to Frank Sinatra, Matt Murdock plays the dramatic parent that drives the plot forward.

Still genuinely funny even after it's millionth read, Kelly's 'Deadpool' is so clear here, I'm surprised Joe doesn't have a few katana under his suit at work. Guess only his dry-cleaner knows for sure.