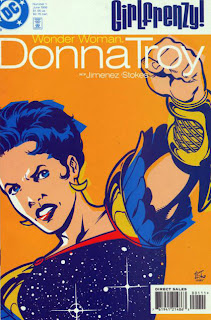 I'm pretty much a skeptic at heart. When I hear the term 'fifth week event', I picture a sling of franchise expanding one-shot comics, comics that you don't regret buying, but still aren't wowed with by the time the last page closes. Then I remember this Donna Troy based contribution to DC's 1998 Fifth Week event; Girlfrenzy, and I remember magic can happen in one-off issues, even if the main character spends much of the issue sitting in church.

Now the unofficial Donna Troy fanclub (of which I'm a lifetime member), always get a bit nervous when the former Wonder Girl is scheduled for attention, because she has been (and currently is still) the DC pinata of choice.

Here however, right from the first silent page where Donna gives food to a homeless woman, you know this issue's team has it right. Of course they do, the book is written and drawn by Donna's biggest friend in creative places, Phil Jimenez. 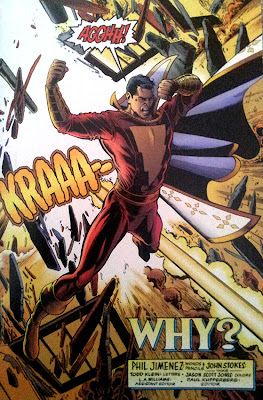 Titled Why?, the story splits in two, as Donna sits alone, telling a statue of Jesus 'We need to talk'. She then reads news stories conveying the second tale's events, as Greco-Roman powered heroes Captain Marvel, Donna Troy as Troia, and her 'sister' Wonder Woman, protect a Holocaust memorial parade against the forces of neo-nazi, the Red Panzer.

With her teammates preoccupied with the Panzer's forces, Troia hopes the lasso of truth will let the terrorist see the reality of his actions, but all it does is prove his 'God given mission' is the only truth he sees. Living in hatred and about to detonate a chemical weapon, Troia tries until the last to negotiate and find reason within his spewed forth hostility.

If that sounds thought-provoking and intense, remember, that's just the half of it. Donna's 'conversation with Christ' (because her Gods are 'beyond her reach') is what really wins this issue it's crown. From little moments like Donna saying she won't ask why her partner and baby boy were taken, to asking the big guy the big question... 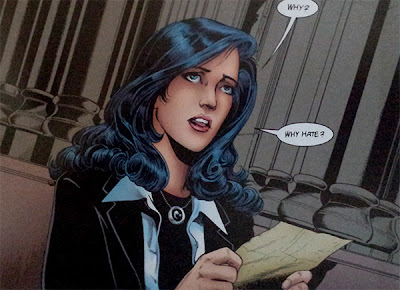 ...Phil nails every hit possible through his uncanny detailed pencils and one of the most human characters in comics. As Donna continues to wrestle with the turmoils of her life (there have been one or two), plus why any higher power would allow hate to fester within their greatest creation, you will find your mind chews over the subject too.

Will Donna arrive at any solid answers? No, but the comic would be weaker if she did. As her talk with Christ and the side tale of the Red Panzer's threat each reach their conclusions, the key lesson becomes this; if you are looking for the answer to the age-old question 'Who is Donna Troy?' you don't need to dig out an issue of The New Teen Titans, the answer thanks to Phil, is right here.