Now I'm not going to lie, while I knew how to drive beforehand, my cornering skills have evolved for the better (depending on who you ask) after playing Gran Turismo on the Playstation. Reading that sentence there will be two types of responses; those who find it funny and those who completely understand. One of those in the latter is 10 year-old Gryffin Sanders. 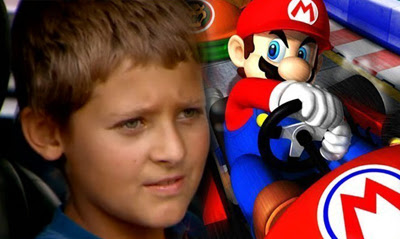 When his Great-Gran collapsed mid-sentence at the wheel, doing 60mph on the freeway, with his younger brother in the backseat, Gryffin took control of the wheel, driving the car out of harms way and into a ditch. The source he credits for his driving prowess and logical mind in the heat of oncoming traffic and danger? Mario Kart.

Originally thinking it may have been a test, Gryffin's moves meant he and his 4-year old brother were left unharmed, as too were all motorists driving on the same road near Hugo, USA. Passers-by helped summon emergency services and the kids 74 year-old great grandmother was soon airlifted to Colorado Springs Hospital.

Gryffin's Dad, Sean Sanders told news teams "The proudest moment I think of this is he's been so humble about it. There's nothing more I could ask of him."