You can keep your Fast and The Furious 8, 9 and 10, the Vin Diesel based series that can burn off it's competitors best, is the one starring the galaxy's most dangerous man, Riddick. 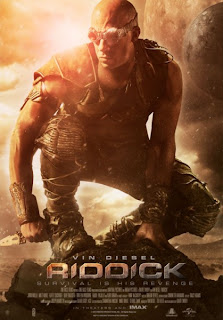 This September, that 'anti-hero' returns in Riddick, along with 'Judge Dredd' Karl Urban as Vakko, and wrestler David Bautista, ahead of his portrayal of Drax The Destroyer in Marvel Studios' Guardians of The Galaxy film.

Left to rot on an alien-infested world, Riddick accidentally summons two crews of mercs to the planet in his efforts to escape. One has a personal connection, and one is more dangerous than he's ever known. But wait! At the end of Chronicles, wasn't Riddick left ruling the Necromongers? Seems this free motion comic has all you need to bridge the gap, in the franchise's usual and violent ways;

Soaked in all that awesomesauce and ready for what follows? Well then, here's the trailer;