SALES PITCH: The Top Selling Comics of July 2013 and Julys Past

Showing what a well-written Clark Kent backed by a major motion picture can do, Superman Unchained #2 not only took July 2013's top spot, it brought DC up to a unit share gap of just 2.4% behind industry leaders, Marvel. The House of Ideas only title inside the top six? Guardians of The Galaxy. How 'bout that? 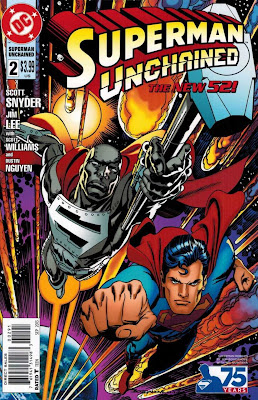 MY THOUGHTS: That's a cool variant (I miss you Steel)! The Top 6 looks like a non-comic fan would think and with a Superman/ Batman movie announced, there will be a lot more of the same - hopefully they won't be the only folk DC concentrate on.

How many wannbe Hal Jordan's are in this world? Seems a fair few. The number one selling toy of July was the Green Lantern power battery (with ring), at 1:1 scale!

Despite having an equally sized price tag to match, if your neighbourhood soundly sounds like a schoolboy quire at dusk, with "In brightest day, in blackest night..." ringing from every house, this will be the reason why.

THE #1 SELLING COMIC OF JULYS PAST: