THE HIT LIST: Ronan The Accuser Named Core Foe For Guardians Of The Galaxy Movie

Sure Thanos's ugly mug will connect the upcoming Marvel Studios' movies, but it will be the deadliest of the alien Kree race that is the main antagonist of Guardians of the Galaxy - Ronan The Accuser. 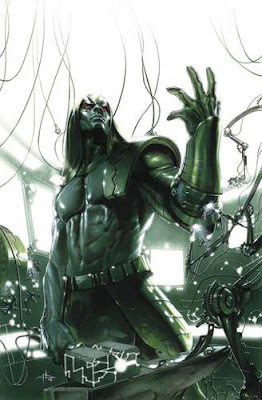 Once second only to the Kree Supreme Intelligence and Imperial Minister, Ronan has both incited civil war against his superiors and attempted to force their genetic experiments The Inhumans, back into their empire.

Willing to do anything for his people, Ronan has led them, fought alongside Nova against the Annihilation Wave and married the Inhuman Crystal in order to establish a treaty for their futures.

Revealed in Empire Magazine, while I guess his main arch-rival may not even be mentioned in Guardians of the Galaxy (due to the rights to the Fantastic Four based Super Skrull presumably lying with Fox), his hi-tech armour and Cosmi-Rod mean Ronan has more than enough threat power to endanger the team, no matter where they run!