WACKIER THAN THE RED SKULL: Court Rules With Marvel/Disney Over The Kirby's

I don't normally weigh in on creator wars over comic properties, as they are always such sad stories of capitalism over ethics and I try to keep IADW a pretty positive comic place. But this is Jack Kirby and when a movie based on his creations doesn't feature his name or give his family a decent cut of it's $1.5 billion haul, something is seriously wrong. You know the movie, it featured these guys; 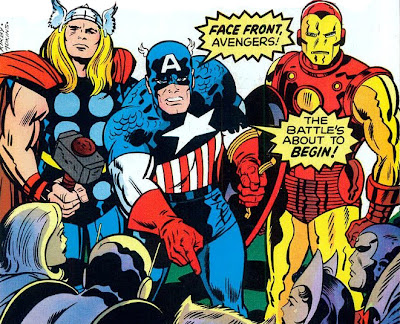 Cap has no idea how right he is. If you took away every character that Kirby co-created (which is pretty much every star of a Marvel title that lasts above issue #32), there is no way Disney would've even looked twice at buying the remaining 'House of (Kirby's) Ideas'.

Yet today's ruling that his surviving family members have no claim to any of his creations, from Lady Sif to Cyclops, because his work was done as "work for hire" is meant to be 'just'. What it is is 'balls'.

Whether you like his style or not, without this man's work there would be a massive void within comics - Marvel may not even have lasted this long. I realise it is paramount to giving away money, but you'd think Marvel, as a sign of respect, would without being forced to, want to make things right. Especially with the Kirby's.

Treating people fairly when they've done you a good deed isn't just an ideal for Captain America comics, it is for the people who still take home a paycheck from them too.

What do you think?  Read the full Reuters press release here for all the tragic details.
Posted by IADW at 8:00 pm