WAR IS IN MY BLOOD! 300: Rise Of An Empire UK Trailer Does A Better Job Quicker 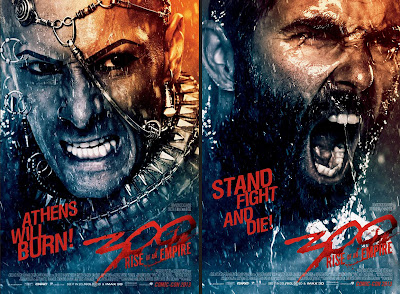 Sure, anyone can give rise to an empire, just not on Sunday mornings... I need my sleep. Luckily with that mindset, I've never had to save my people from invading forces, and even luckier, the UK trailer for 300: Rise of an Empire is only sixty seconds long. That means it can be viewed in all it's brutal glory before my eyes close for another Sunday nap.

Based on Frank Miller's Xerxes graphic novel, this trailer shows the same amazing 300 style cinematography is still in play (thanks to Zack Snyder), as the battle of spectacle and blood moves to the oceans. Shorter, yet more to the point than the US trailer, watch Greek general Themistokles (Sullivan Stapleton) try to unite his people, alongside Queen Gorgo (Lena Headey), as mortal-turned-god Xerxes (Rodrigo Santoro) and Artemisia (Eva Green), vengeful commander of the mighty Persian navy, try to destroy them.