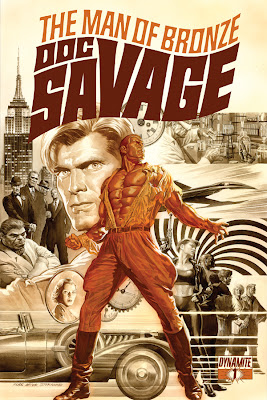 I really dug DC's First Wave line of books. It was a brilliant idea - put pulp's biggest icons into one legendary world.

Sadly the buzz fell off, marketing focussed elsewhere and Doc Savage and co. returned to the shelf at Conde Nast, waiting for someone like Valiant or Dynamite to buy them.

Well, news has come the latter did stumble in the door, and brought the whole damn store. Better yet when this new Doc Savage series launches in December from Dynamite Entertainment, it will be written by Chris Roberson, drawn by Bilquis Evely and feature covers by Alex Ross, John Cassaday and Stephen Segovia. 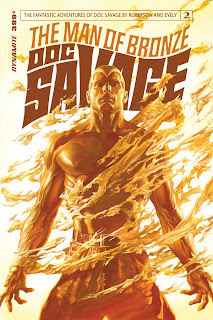 Sure Chris is the guy who took over the JMS Superman arc, but for me what makes him the right man for the Man of Bronze isn't his work on the Man of Steel, rather BOOM! Studios' Starborn. I tell ya, that book was Awesome. Capital 'A' intentional. Twists, turns, lethal ladies, conspiracies - just like good Savage pulp should.

Says Roberson on bringing the character home to the publisher currently the caretaker of many classic pulp icons like Vampirella, "Growing up in the 70s, it was impossible to miss the Doc Savage reprints in every bookstore and on every newsstand, with those striking covers. Doc quickly became and remained my absolute favorite of all of the pulp heroes."