BUY THAT WOMAN A BEER: Lynda Carter On Wonder Woman

The fact Ant-Man will beat Wonder Woman to getting a solo movie should have Warner Bros hanging their heads in shame, if not fans picketing in the streets. Still, it's not from lack of trying. Before Joss Whedon made The Avengers a household name, his idea for doing the same to this avenging Amazon was shot down, and two planned TV series haven't had any more success. 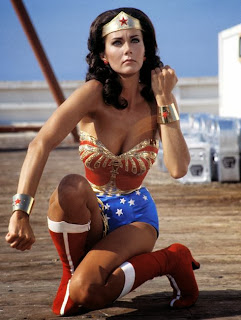 Still, Lynda Carter, the first female on the allegedly third part of DC's 'Trinity' has appeared on Entertainment Tonight regarding DC's We Can Be Heroes campaign against hunger in Northeast Africa, and had a really good stab at what's needed to make Wonder Woman work while she was at it.

“Maybe they need a female writer who gets it. I've often tried not to say that, but I think it’s the truth. It’s like, ‘Hellooooo guys, get a female that understands what that’s all about.’ You look at any society that suppresses women, and it’s violent. Look around the world... There’s a humanity that they're missing. There’s got to be a sweetness, a kindness, a goodness in the character. The rest takes care of itself.”

Me, I'm not too sure that a female writer is needed, but that last half of the quote re: the void Wonder Woman's presence fills in the world is damn fit to be printed. My new definition for Diana - the humanity mankind is missing.

Labels: Buy That Man A Beer, DC Comics, Lynda Carter, We Can Be Heroes, Wonder Woman