Who can be jaded over comics, when Marvel announce a new She-Hulk series for February over on USA Today? Aiming to make the sensational Jennifer Walters even more iconic, the Marvel NOW! title will be written by Charles Swamp Thing Soule, a man who like the Jade Giantess is a lawyer too. 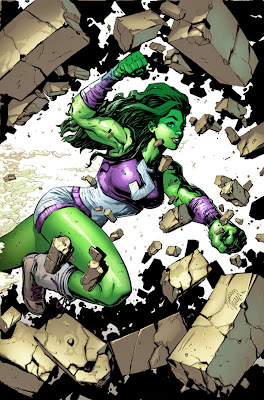 More than Special Victims Unit with a mean left-hook, Charles looks to put Jen's optimistic spirit to the test, with challenges born of her own decisions. That positivity is key to the character's appeal, as Jen relishes the lifestyle given to her by gamma radiation - unlike Bruce Banner.

Short, fun story-arcs and the reality of trying to be exceptional at everything are key elements of the series to be, as Javier Pulido develops the heroine's new look. Mixing "savageness" with an unmissable presence, the former Human Target artist says "Yes, she's Hulk's cousin, but she's also gorgeous. That's a very important part of the character, and I plan to keep it."


Marvel in turn is expected to keep fans reeling with Marvel NOW!, releasing a series of one word teasers about upcoming NYCC news. 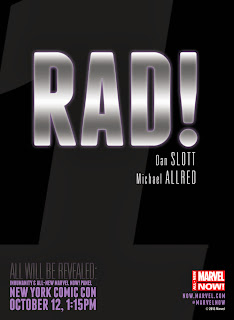 "Corporate" with Peter David and artist Carmine Di Giandomenico looks to rebirth either X-Factor or Heroes For Hire. A fiery "Trial" and "Judgement" teases the X-Men will meet the Guardians of the Galaxy via Phoenix. "Mind Bubble" pokes Captain America's future foe, and the one that has me stoked in seven shades of awesome, "Rad!", putting Dan Slott and Mike Allred to work on presumably my favourite Marvel character of all, The Silver Surfer.