GIVE ME YOUR TIRED, YOUR POOR Inhuman Refugees Spill Out On Earth Post Infinity #3

It's a common dream - waking up with super-powers, yet this December, people across the Marvel Universe will have to struggle with that and how their newly awakened abilities place them within both mankind and the family tree of Kree genetic lab-rats, The Inhumans. 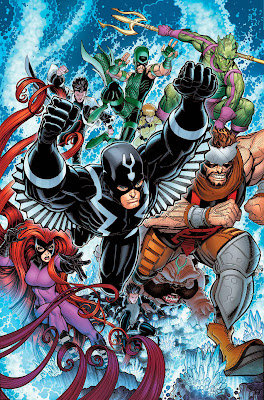 (Spoiler alert for Infinity #3 ahead). Speaking to the press over what lies ahead this Fall in the Inhumanity event, writer Matt Fraction confirmed that some of the classic Kirby looking characters will be getting a 'still recognisable' update by artistic drivers; Olivier Coipel and Joe Madureira.

With Karnak surprisingly snatching the lead role from Black Bolt in the kick off issue, Inhumanity #1, the one-shot by Fraction and Coipel turns the puzzle solving specialist into the reader's 'eyes', as the secret plan of Black Bolt and Maximus is unveiled.

Exploring how the world responds to Attilan being destroyed by Thanos in this week's issue of Infinity, the issue of the aliens arrival on Earth and also awakens latent others of their kind, already living here.

From there tie-in issues will pop up all over the Marvel line, as well as in the spin-off Inhumanity: The Awakening by Matt Kindt and Paul Davidson, and Fraction and Madureira's hotly anticipated Inhuman. With the expansion of the plot also expanding the cast, the latter title will feature new characters in an unlimited supply, as the super-humanitarian refugee crisis spills out across the planet.

With Infinity #4 carrying a top secret twist that will help define the difference between the Inhumans and fellow Marvel 'genetic mistakes', The X-Men, the issue will also point the way towards a second "bookend" Inhumanity title.

For me as a fan, it is just great to see Marvel pushing next tier back concepts into the limelight like The Guardians of the Galaxy and The Inhumans, and succeeding. Sure there is a movie in the works for one, and talk building for one of the latter, but that is pretty tangental. What matters is these Marvel Knights, who have backed up hit books like The Fantastic Four, The Illuminati and more for so long are now set to break even the heights that creative teams like Stan Lee and Jack Kirby, or Jae Lee and Paul Jenkins even took them, all with a hot refugee twist that parrells well with so many of todays social issues, just like classic Marvel tales always have.