DC may have canned the Justice Society, but Marvel thankfully rowing in the other direction, giving their WWII team the ultimate revival. Captain America, Namor The Sub-Mariner, Winter Soldier and the original Human Torch are reuniting in an ongoing series in January, titled All-New Invaders. What's more, it's drawn by Steve Pugh and written by JSA The Golden Age scribe James Robinson. 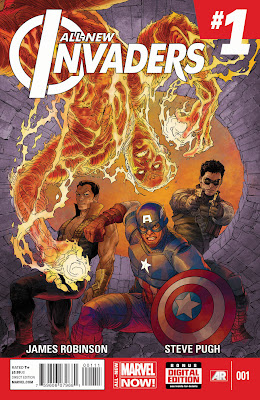 How the bonds that saw the team fight the Nazi threat evolve to tackle the Kree army from obtaining a device that can control Gods will be at the heart of the new series, joining the previously announced Inhuman title in the next round of Marvel NOW initiatives.

The wave continues through until April and launches in December with a special 'jumping on' issue; Avengers #24 NOW. There the team unite to stop a rogue planet hurtling towards Earth.

With this Marvel NOW wave set to highlight characters such as Silver Surfer, Black Widow, and The Falcon, look for some really interesting projects ahead. Says says Marvel editor in chief Axel Alonso on USAToday "My favorite thing is showing people why those characters that aren't necessarily household names like the Falcon and Silver Surfer should be, and why they're every bit as vital to the Marvel mythology as Spider-Man and the Avengers."

"Our catalog rolls deep, and it's giving people fresh, new voices, breathing new life into characters that quite frankly just deserve their own spotlight." 'Nuff said.