John Buckland and Troy Marcum had just finished teaching life lessons to children at their local American Legion post in Milton, West Virginia, when the two men, dressed as Batman and Captain America respectively, noticed a nearby house on fire and ran to the rescue. 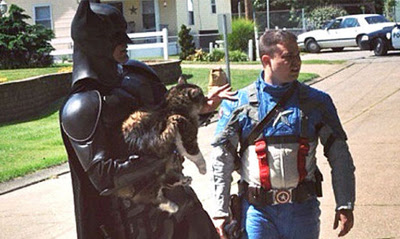 Thankfully the occupants were out of town, but not so the household kitty. As emergency services were surprised to arrive to a rescue already in play from the comic book icons, they also found Buckland (having been a firefighter in both the U.S. and Iraq), not only knew how to rescue the unconscious cat safely, but how to resuscitate the feline as well.

While the firefighter in the video above mistakenly confuses Captain America for Robin, the comic book ties don't just stop there. Eagle-eared listeners would have caught that Mr Buckland's organisation is called Heroes 4 Higher, and their hire power can be called upon to provide positive messages for kids. How cool is that?