SALES PITCH: The Top Selling Comics Of August 2013 And Those Past

When you have a cohesive universe with strong direction, your 'events' will always steal first base. Not only does Marvel Comics prove that in the sales results of August 2013, despite just that one comic inside the Top 6 sellers of the month, they still manage steal the spot of top publisher too, while nearest rivals DC trail in unit share by 3.16%. 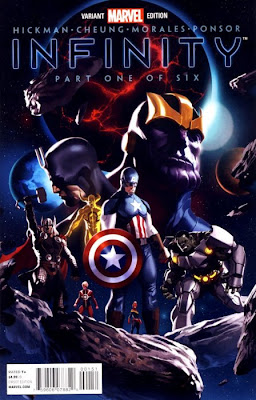 MY THOUGHTS: Marvel Cosmic is the new king in town. While it must be in Cap's contract to stand at the front of any group shot, I wouldn't be surprised if Inhuman isn't the only cosmic-ish title that launches from this book by the tale's end.

Full August 2013 stats after the jump.

'Little Engines' don't come smaller than this! The #3 seller on the trade paperback list, Rocket Raccoon: Tales From Half-World.

Reprinting Rocket and his first mate Wal Russ's battles to protect the Keystone Quadrant from killer clowns in the Toy War, look for reprints of this to reach even higher as the 'Coon's big screen debut nears.

THE #1 SELLING COMIC OF AUGUSTS PAST:

While records state Dreamwave's Transformers G1 #5 took the top spot in 2002, an asterisk points to the fact Fantastic Four #60 (priced at a crazy nine cents) actually ruled the roost by an estimated 621, 580 copies!