STAR WARS SUNDAY: The Crayon Sculptures That Will Have You Wax Nostalgic

Here on IADW, I've shown love for sculpture in everything from an Alien carved out of banana to an Optimus Prime made from ice. Looking to show off just as much talent is Wax Nostalgic. A super sculpturist carving Star Wars characters out of the same kind of Crayolas that formed my childhood staple diet. Isn't that right R2? 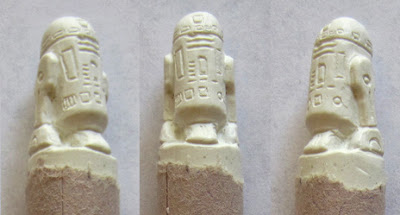 Now that is talent - plus his white crayon is still clean! How does that happen? Speaking of 'white' and 'Star Wars', there is another obvious contender of course;

If you could keep such an awesome artwork safe from smaller (or smaller at heart) hands, Wax also sells his affordable art at online here. The guy I'd buy? No guesses needed... 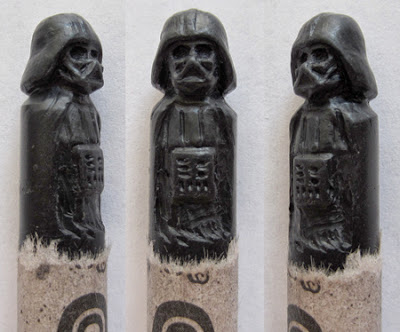 Darth Vader was one of the coolest characters of my childhood. In fact my Grandmother made me a Darth Vader in her ceramics class I liked him so much, and still to this day, he's the bad guy I always favour (just in my mind, he never repented).

What do you think?  To see Boba Fett and the entire range, visit Wax Nostalgic after the jump.
Posted by IADW at 7:00 pm