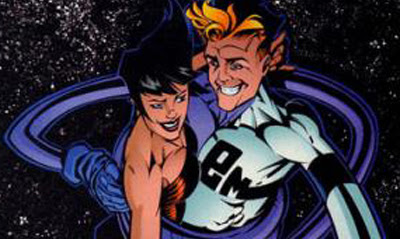 This week, I'm betting if you had to guess what character was homaged next, you'd never have guessed Elongated Man's wife, Sue Dibney. Well it's her. And if you are anti DC's Identity Crisis or the growing darker nature of comics, you'll LOVE The Metasciences track Four Colour Love Story, which also mentions the death of Elektra and Spider-Man's girl Gwen Stacey, in a love ballad told from the point of view of an unknown Silver Age super-hero.

"And Gwen Stacy isn't dead, she's only sleeping
And Elektra isn't evil or insane
And those bastards in the pentagon can't really kill Sue Dibney
No more than they could kill off Lois Lane."


What do you think?  For the full lyrics to this song, click here. To buy this track, visit itunes.com
Posted by IADW at 8:00 pm