TOTAL ECLIPSE OF THE DARK: New Crew On Shadowman As 'Must Read Valiant' Launches Sure Valiant are throwing a party over upcoming titles Eternal Warrior and Unity, but that doesn't mean you're not invited to their established raves. Your invite? The new Must Read Valiant initiative - a series of self-contained jump-on friendly issues.

Together the duo are revamping more than Shadowman's image. New threats, conflict with his teachers and changing the way he interacts with supernatural realm the Deadside, are just part of their plans. How his foster home past manifests itself in his modern abilities and how Jack Boniface struggles in the shade of his father, a previous Shadowman, are also on the cards. 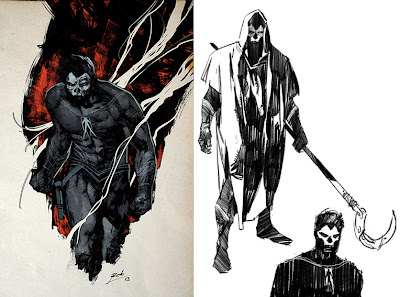 Talking about the new direction with USAToday, Milligan said "I'm not throwing everything out with the bathwater, I'm just making the bathwater a bit more grimy and, hopefully, unpleasant... It seems to me that there are probably more monsters and demons inside Jack's head than there are in the Deadside."

Guess we'll find out in December!