Back before he turned The Avengers into a big-screen success, Joss Whedon was a guy I hoped would take a run as writer of The New Teen Titans. Starfire's alien heritage, Raven's relationship with Trigon and Deathstroke the Terminator would all benefit from the pen behind Serenity and Twilight/True Blood kickstarter Buffy Vampire Slayer.

While Joss has the writing chops, as with anything Teen Titans, there's few I'd pick to draw the heroes over George Perez. An artist who has even drawn this throw-down of the team clashing with another of his career defining projects, those Avengers I was talking about earlier. 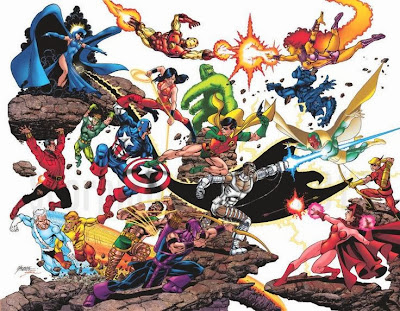 I know, suddenly Avengers/JLA just seems a consolation prize. Everytime I look at this drawing, match-ups I'd never thought about become slugfests I'm dying to see. Beast vs Beast Boy, Hercules vs Donna Troy, Quicksilver vs Kid Flash... I literally get lost in thought.

Hopefully after his recent eye surgery has healed, George gets to continue putting out stellar work for BOOM! Studios in 2014. Still, there will always be one ear of mine to the ground waiting for word a contract exception that has been made for an old continuity team up of two great eras.