I'M SORRY MS. JACKSON I AM FOR REAL: Outcast Brings Exorism To Image In 2014

Last time the word 'outcast' was on everyone's lips, it was the name of a band (albeit with a 'K' not a 'c'), whose hit Hey Ya, forced clubbers and houseworkers alike to dance like people possessed. Come 2014, the possession stays but everything else changes. The 'c' is back. 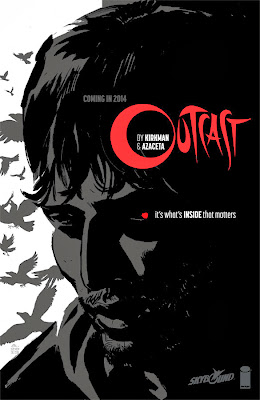 Marking writer Robert Kirkman's return to monthly horror comics since launching The Walking Dead, Outcast will tell the darkened tale of a man shunned in society, plagued by possession and about to realise the evils that beset him plague the entire world.

The adventures of Kyle Barnes have been in development for almost two years, drawn by Paul Azaceta, the series has Fox International eyeing it as a possible TV project before the first issue even hits.

If you need to see people possessed in the interim however, just turn your computer speakers to the window and play this track as people pass by...