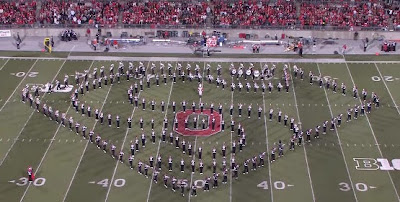 In New Zealand, our main game is rugby union - you know: The All Blacks. At half-time, there isn't really that much of a 'half time show'. Not that I would know, I'm generally the guy running for a tub of hot chips and heaps of tomato sauce.

Still over in American football America, half-time is big business. 'Hollywood production planning' big. So when Ohio State University Marching Band recently needed a theme for their halftime routine, they ran with a salute to the biggest blockbusters of the last few years, films like Man of Steel, Lord of The Rings, Harry Potter, Pirates of The Caribbean and more. Hit play and see what I mean;

From Buckeyes to bullseyes - that was fantastic! Why wasn't Spider-Man 3 included in the homage? Because I said "the biggest blockbusters" not the ones you're still trying to erase the taste of from your mouth.