Wasn't it great that so much of the news from NYCC 2013 wasn't about movies, online media or video games, but rather about comics? It has been too long my friends, too long. One of the biggest hits for me, the imminent return of The New Warriors at Marvel. You know these folks; 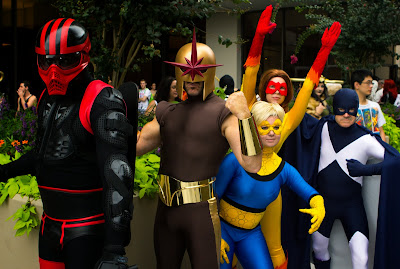 Photographed by the awesomely talented Pat Loika, don't get me started on why Marvel originally went with a brown 'Kid Nova' in New Warriors, just focus on the fact that's one hell of a Night Thrasher!

I used to literally race to the bookstore to get every issue of the original series. The team's return has underscored how characters we grew up with actually are 'friends'. We invest in the characters, their lives, and enjoy seeing familiar faces return, treated well. Of course 'heroes needing to return' translates in comicnesse to.. 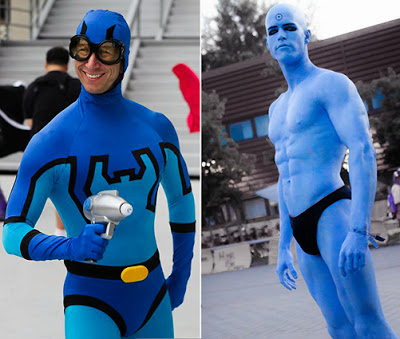 Seeing this shot of 'Blue Beetle' just reminded me all over again how much I miss Ted Kord in the DCU. Even the smile is perfect! By contrast I thought it was cool placing Dr Manhattan beside him, as Watchmen was based on Blue Beetle and co, plus I'm not quite sure if cosplayer Daniel Lange from Norway painted himself that way, or the Norwegian cold does that to you if you step outdoors wearing a less concealing outfit than what Blue Beetle has!

Of course if I start the post with characters that feel like home, I better end with one too... 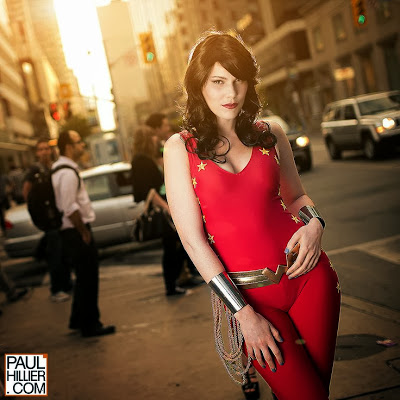 (Sigh) Donna Troy may have aged (and been removed from the current DCU) but she never had a better costume than this one. The heart of the New Teen Titans as much as Grayson was the soul, this cosplayer shot by Paul Hillier, really captures the down-to-earth appeal that made Wonder Woman's 'sister' seem like one of us for so long.