One of the best parts of growing up 80's, was the ability to get all your Cobra action figures together and have them take on the Autobots - creating your own franchise crossover, before you even knew what a franchise crossover was! While the two powerhouse brands have met in a variety of mini-series over the years, IDW are launching an all new Transformers / G.I. Joe ongoing in 2014, written and drawn by Tom Scioli and co-written by John Barber. 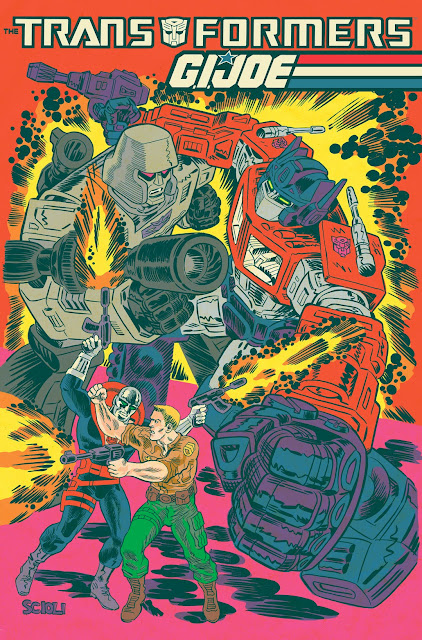 From the sounds of it, the summer debut will pump up the energon just in time for both brands respective anniversaries! Set on Cybertron rather than Earth, how will the Joe's cope on an entire world consumed by war? Will Destro be an 'arms dealer' when  the streets are beyond his most advanced technology? The concept possibilities alone are more mind-bending than Doctor Mindbender!

Says Scioli “We’re asking big questions. Is war an inevitable condition of life? What is free will?...  The Transformer characters push the boundaries of what shapes life can take in this infinite universe of ours. Perhaps it will be a machine that teaches us what it is to be human.”

Those were pretty much the questions my action figure melees asked too. Not that I'm stealing credit or anything.