NYCC 2013: X-Factor's Gambit, Stryfe vs Cable And X-Men / Guardians Of The Galaxy

You can't have a Comic 'Con without X-Men, even cosplaying aside, it just wouldn't work. At NYCC Marvel kicked their X-Focus into gear speaking on projects post current X-event, Battle of the Atom. While the Q&A also let slip plans are in the works for non-mutant Iron Fist, the biggest hit for me was the news Uncanny X-Force and Cable and X-Force will clash in Vendetta. A weekly in-title crossover in January, featuring the return of Stryfe. With an X-Force movie in the works, fans and studios need to be shown that Stryfe is still eleven shades of awesome, and Cable meeting a team of X-Force wannabes is a wicked backdrop!

Not to be outdone in the crossover stakes, is writer Brian Michael Bendis's All-New X-Men and Guardians of the Galaxy team-up, officially titled The Trial of Jean Grey. Revealing that the original X-Men will be sticking around, but not why or how, the six-issue January story shared between the two titles, sees the universe unite to hold Jean accountable for the crimes of The Phoenix. 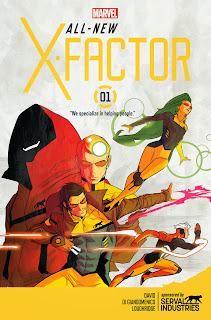 The ragin' Cajun Gambit, will help relaunch writer Peter David's All-New X-Factor. Now a corporate team of super-heroes, X-Factor will be backed by search engine creators, Serval Industries. Heroes for hire revealed so far also include iconic X-Factorians the untrusted Quicksilver and his half-sister Polaris, with three more still to be named.