DC, as one of the "Big Two" has had a pretty quiet NYCC 2013 so far. Thankfully writer Scott Snyder, among talking Batman: Zero Year and Superman Unchained, managed to reveal his Vertigo hit American Vampire returns next March, titled American Vampire: Second Cycle. 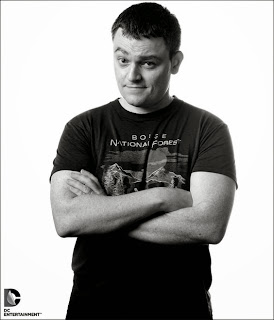 Taking place in the late 60's, Second Cycle picks up with Pearl and Skinner in different places, the latter a vicious hitman.

Also marking a return under Snyder's helm, is long absent bat-character, Stephanie Brown, aka Spoiler, who returns in the third issue of the previously announced weekly series Batman: Eternal. The idea of James Tynion IV, the only other absentee I want to hear word on is Wally West. Asked that same question by a fan at the 'Con, Brian Buccellato replied  "When the time is right, Wally will return. Don't applaud--I don't know when that will be."

OTHER DC NEWS IN BRIEF  Writer Scott Lobdell has teased Jon Lane Kent, the original son of Clark and Lois from an alternate future, will be the new lead character in Superboy, after the current one meets his fate in Krypton Returns. Supergirl will join another family of DC books shortly. The Question may be getting his own series.