SALES PITCH: The Top Selling Comics Of September 2013 And Those Past

Sure this may be a post about September 2013's sales results, but it is kind of fitting news comes in Halloween filed October that a book titled Forever Evil took the number one spot, and had DC beat Marvel for top publisher of the month, by a unit share lead of 15.34%. 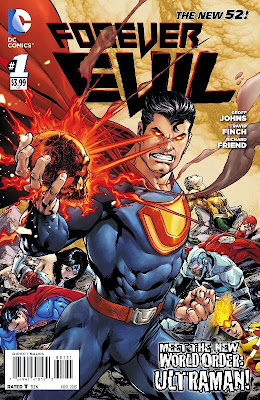 MY THOUGHTS:
While having The Riddler, my top Bat-rouge of all, headline a Top 6 book brings a smile to my face, this list really has to show the powers of event books and cover gimmicks. There isn't one title in the bunch that doesn't fall under those categories. Where Snyder's Batman is a hit read even without a grand cover, it truly shows 'event lethargy' isn't at the fever pitch it sometimes sounds like.

Full September 2013 stats after the jump.

Usually Image Comics is the publisher making waves over in the graphic novel chart, but while Image has half the category's Top 10 in September, it's IDW grabbing headlines. All thanks to My Little Pony: Friendship Is Magic Vol2.

Showing the power of all-ages fare, the 80's franchise makes an all too rare appearance for a deserving publisher in the sales figures.

THE TOP COMIC OF SEPTEMBERS PAST:

Secret Invasion #6 continued to show Gabrielle Dell'Otto has no cover artist equal in 2008, as Marvel re-united the Avengers post Avengers Disassembled, ahead of their media onslaught.