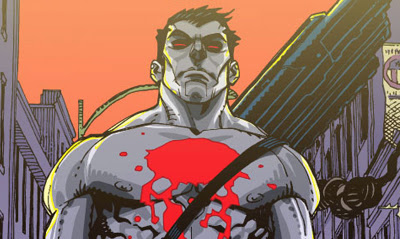 The first bullets in the chamber of Valiant's universal sweep of 'jumping on points' are November's Quantum and Woody #5, and a new era of Shadowman greatness for December. Now seats are beginning to fill on another hot creative team, locked and loaded for January; famed X-O Manowar artist Bart Sears joins ongoing co-writers Christos Gage and Joshua Dysart for a two adrenaline-pumping issues of Bloodshot and H.A.R.D. Corps.

Firing off in issue #18, Get Some is a story-arc which will see "weird and subversive turns" according to Gage on MTV Geek, as Bloodshot and the men and women of H.A.R.D. Corps face off against a network of saboteurs in the Persian Gulf. But digging into the truth behind their employer's actions brings the 'Shot face-to-face with an older generation of super soldier, one who has survived, killed in and learned from some of the dirtiest conflicts in history.

Personally, I have been hooked on this series since it's stunning American flag cover to the first issue, which featured Bloodshot's 'awakening' - and it is yet to disappoint. With Bart, Joshua and Christos on the same story-arc, many comic fan's might find these issues to be their 'awakening' too.