A BLEEDING MONK, A GOAT AND AN ARCHER WALKED INTO A BAR: Valiant's Zero Issues 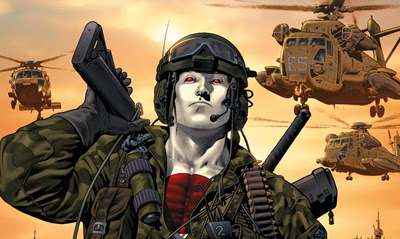 Following on from making reprints of their hottest first issues $1 and creating the jump on point series Must Read Valiant, Valiant Entertainment is rolling out a new set of 'zero issues' early in 2014, to go behind the scenes of some of its brightest stars, such as the Bleeding Monk from Harbinger and Bloodshot's H.A.R.D.Corps.

The nominees for the February and March titles are; 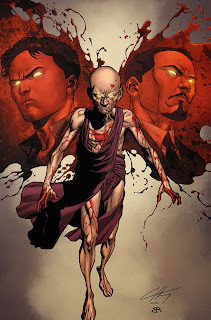 Peer inside the war journal of teenage assassin, Obadiah Archer, and his childhood raised to be the ultimate weapon in the Sect.

BLEEDING MONK #0: (W) Joshua Dysart (A) Khari Evans
The Bleeding Monk, formerly Toyo Harada's right hand, has been missing for over a year. Now, uncover his true whereabouts - the first of many revelations to come.

H.A.R.D. CORPS #0: (W) Christos Gage and Joshua Dysart (A) ChrisCross Remember the 90s? The most elite assets of Project Rising Spirit are teaming up for an early mission, but, in the decade of dial-up, bugs are bound to pop up in the wetware.

THE GOAT #0: (W) James Asmus and Tom Fowler (A) Fowler
Are heroes born or are they bred? Who -- or what -- spawned the powerhouse of animal husbandry known simply as Vincent Van Goat?

Personally, Bleeding Monk is the hero of the zeroes. One of the best 'new Valiant' characters, I have been waiting since Harbinger #1 to have an issue dedicated to this guy. Mind you, Project Rising Spirit are an evil S.H.I.E.L.D.-like organisation, so they don't fall too far behind... neither does Goat.. or Archer. See, nothings ever easy with the new Valiant universe, but boy, even the bad times are good.