You know, I thought I had a pretty cool name until I put all my initials together and they spelt D.A.W. As in 'door', 'duh' and 'dawg'. So I keep it at Dan. However, one guy recently arrested in Singapore has the actual name of Batman Bin Suparman, which really could only be cooler if his middle name was changed to 'Bee-Ting'. 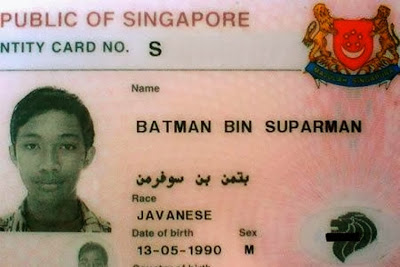 The 23-year old's crimes? Stealing his brother's ATM card to withdraw money, breaking into a business to steal more money, and use of heroin, revealed through a test of his super-bat-urine.

While all good fans know neither Clark nor Bruce actually have any brothers, and would never put the title of 'hero win' on any person turning to theft, this pretender to the throne has over 10,000 likes on his Facebook club. Hopefully one of them can help encourage him to do better things with his life, if he isn't too busy hanging like a bat from the prison shower roofs, afraid of the 'kryptonite' below, to listen.