LEST WE FORGET: Magog's Kingdom Comeback

Despite having a first class ticket to ride, some of comics best miss the train and often get left to aimlessly wonder the platform, all but forgotten. In Lest We Forget, I pluck a limbo-lingerer's need for a comeback. Today, it's DC's one man army corp; Magog. 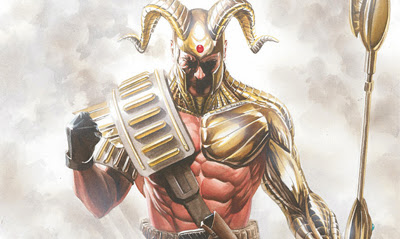 One of the most bizarre disappearances at DC, even before the 52 reboot, Magog debuted in Kingdom Come, one of the publisher's most acclaimed projects since the 80's. This 'Elseworld' saw him go from public saviour as killer of The Joker, to public enemy #1, with the detonation of Captain Atom and the destruction of Heartland U.S.A.

In the 'real' DCU, tragedy also occurred in that he went from highly promoted icon to... well, dead, way before his time.

WHY HE IS COOL: Two Words: 'Horns' 'Trident'
Okay, so you need a little more convincing. In a nutshell, Magog fills a void in a universe where militant heroes minus a bat-connection, are mostly pushed back a few rows so the capes can gleam. Magog borders both those benches by walking in the light, while the shadow of what he could become hangs over him.

That's the crux of Magog; he's the man fighting to save the world when everyone expects him to end it. How does a man keep stepping forward with that kind of scrutiny? How does he keep himself in check when he can already see the need for a firmer response to crime? These plot-points aren't just relative to the news of today, they're as golden as Magog's armour itself - which you have to admit, darn well rocks, even when it's not painted by co-creator Alex Ross. 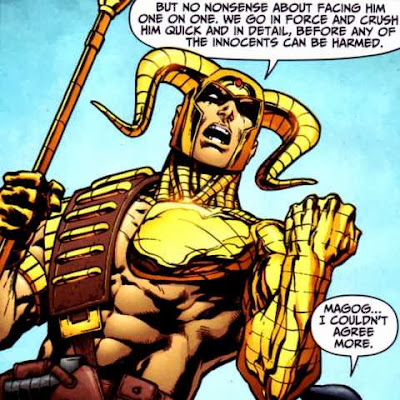 More than a 'DCU Cable', David Reid had a military background born out of a family of service people, dating back to Franklin D. Roosevelt. Gaining mystical powers as a result of a botched operation in Afghanistan, he would live on to accept a new tour of duty as part of writer Geoff Johns ever-expanding Justice Society of America, a team his great grandpappy fathered.

Resurrected by Gog - a deity of the third world, having perished in the Congo among a divided JSA, 'Lance' was finally christened Magog for the first time. Though conflicted, Magog would eventually rise against his saviour and kill him, in order to stop his darkened agenda. Querying why he still lived and the team's less than pro-active stance, his accusations cracked the former DC's foundation stone team in two. 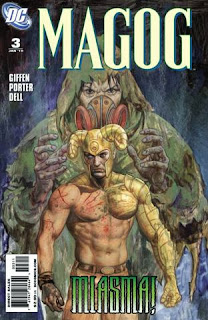 After these high profile gigs, DC went a little schizophrenic. Magog moved into his own series, touted as one of the next wave of DC icons. The book continued his hot creator handling, and was produced by Howard Porter, Scott Kolins and Keith Giffen. It lasted 12 issues. While that's nothing new in this era of comics, the 'icon' was quickly killed off in maxi-series Brightest Day, thanks to Maxwell Lord.

After the obscenity cursing died down (which only just happened last week), I'm still left with the question 'Really?' I know he takes his namesake from the false idol golden calf, but does it have to be so literal? Did we have to through the golden armed baby out with the bathwater?

HOW I'D GET MAGOG FIRING AGAIN: If he could bring about the end of one alternate universe, he can bring about another. Not to open a can of worms, but the "New DC52" isn't all that new anymore, and the continuity that allegedly scared readers away before if you want to buy into that, is actually back. So let the Crime Syndicate have the wasteland they covet, and let the man who knows when mankind is being played by higher powers, strategise on how to take them down and return us to one where all that glitters is gold.

IGN once ranked Magog as comic's 75th greatest villain of all time. Let's give him a chance to be it's greatest hero.