MOMENTS IN COOL: Colossus: Puppet Of The Shadow King

It's hard to believe, but prior to Uncanny X-Men #279, I'd only read one X-book. Still from guest appearances, I knew who was awesome. 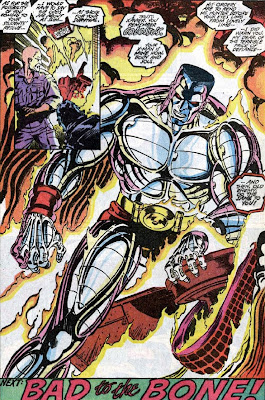 When #278 ended with a Paul Smith Terminator 2-ish splash page highlighting Colossus's return - albeit as a villainous puppet of some dude named The Shadow King - I knew he had set the stage for an issue above all previously recorded levels of 'awesome' - and it was.

#279 is part of the Muir Island Saga, which basically unites the X-Men with X-Factor, just a few issues before the 90's blue and gold teams debut. The reason why I chose to highlight this issue, not the story-arc is because A) I'm a freak for Colossus, and B) this issue is the X-Men's version of The Shining.

That is if Jack Torrance/Jack Nicholson was a massively tall Russian muscleman made of steel. You know, like this one; 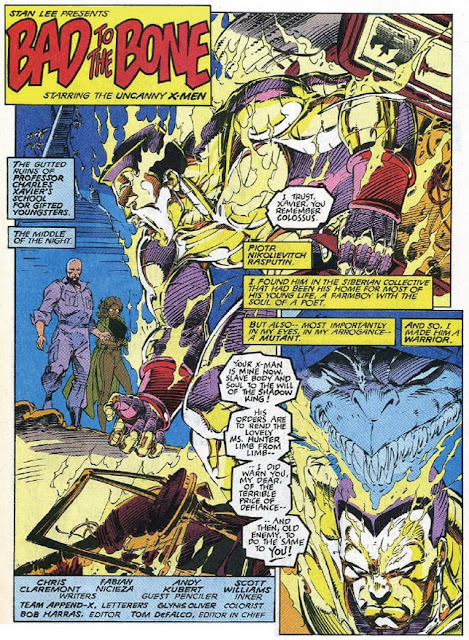 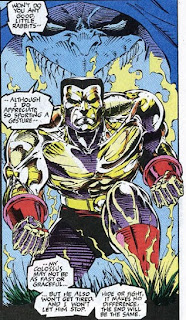 The artistic team for the issue as you can see changed, with 'guest penciller' Andy Kubert stepping in. 1991 was the same year Andy would help produce Batman vs Predator, so the chase scenes he drew here no doubt came in handy, let alone prepared him for his future definitive X-run!

As for where the other X-Men are in the Professor's moment of peril, over on Muir Island, Forge fights to free possessed X-Man Wolverine, as Gambit, Rogue and Jubilee who have fallen victim to Shadow King's global negativity manipulations close in.

With Xavier's original nemesis now in full control of the all-new Colossus (and having had a few hits behind the wheel), Professor X and Stevie Hunter flee into the grounds of the Xavier Institute, only to find them crushed behind them, beneath an all too familiar foot; 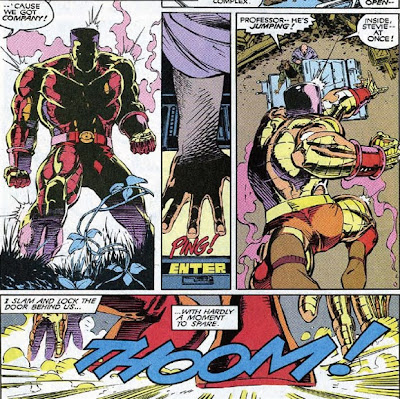 How sweet is that last panel? I swear, to highlight how badass a character is, have him go evil for an issue or six - it's the only way. 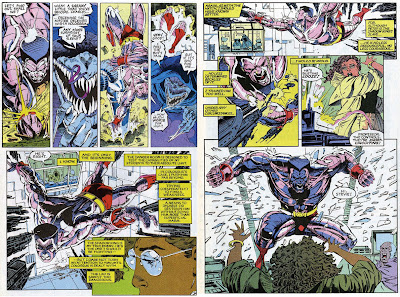 Did you click to enlarge - The Shining's 'Here's Johnny!' was never done better in comics than here. The pacing of the book gets a helpful credit to Jim Lee, but I think that in part can also go to Fabian Nicieza, who keeps things a little more clipped than co-writer Chris Claremont was lone to do - even with Chris's plentiful exposition boxes in play. 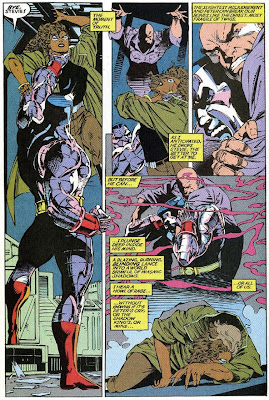 That 'Bye Stevie' has to by the creepiest good-bye in comics, up until Bizarro met the All-Star Squadron in DC's Infinite Crisis.

As for the Professor vs Colossus - I know that sounds like an excuse for 'Okay, so what happens in panel two?' kind of fight, but remember, when the X-Men split in two teams in two issues time, Charles is in a wheelchair - which leaves very little time for that to happen...

Relive the chase and get the answer by tracking down Uncanny X-Men #279 from your top comic supplier.

What do you think?  Do you remember this issue?
Posted by IADW at 7:00 am