If there's a few spare dinero rolling around in your wallet and you're thinking of adding an extra purchase or two, here's three quick-fire reviews to help steer that spare change in the right direction. 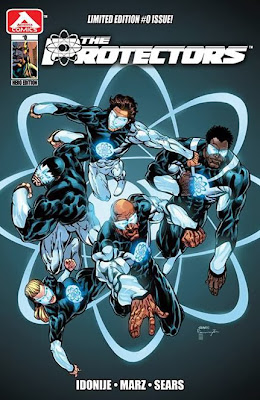 Seen one alien race, you've seen 'em all? Not like this! Sears packs this issue with an unbelievably cool looking cosmic threat, heroes and splash-pages you won't believe.

As Galek lays a dormant power in early man's DNA , we slide forward to the present day return of the alien forces which chased him to our planet. Their star opposition, football hero Isaac Chike, empowered by Galek's lasting legacy.

Packed with bios and interviews with the team and creator Israel Idonije, this book shows just what teamwork can do. ***** 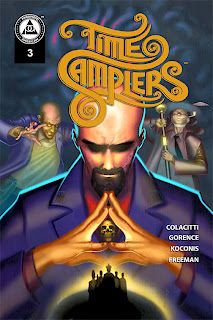 If three writers is what it takes to have every comic start with an Angel kicking a Devil in the crotch, I say start signing 'em up!

Having this issue go on to do so much heavy lifting in terms of explaining it's mind augmentation/ conspiracy theory plot is a pretty tall ask, but the creative team does well to break it down into digestible pieces. 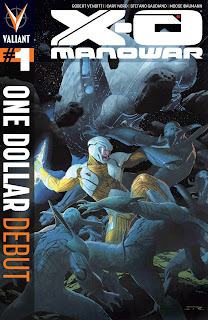 Dollar debuts are the perfect way to stop your original Valiant #1's getting worn out, or to let new readers in on the ground floor now the book is a few flights up.

Knowing this issue was the launchpad of the new Valiant Universe, doesn't add anymore 'wow' to Nord's pencils or Venditti's plot, but somehow does at the same time. Packed with Roman battlefields, a father's death, alien kidnappings, cosmic worlds and warsuits that kill 99% of those who wear them, X-O Manowar #1 isn't so much the launch of a new universe, but a damn good reason to jump over from your current one. *****