ROBOCOP, IS THAT YOU? New Poster and Trailer Shake The Web 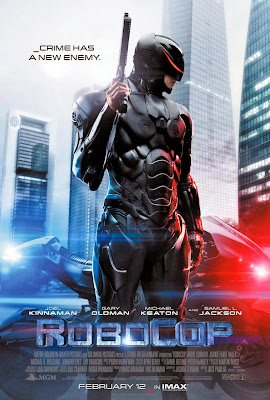 For a pretty dormant fanbase, the RoboCop clan are fiercely protective of the Detroit cyborg they first met in the 80's. I should know, I'm one of them. While it's been a while since Murphy tore crime a new one, MGM and Sony are continuing to ramp up audiences for their February 2014 remake, with a second theatrical trailer and an even snazzier poster.

Set in 2028, Alex Murphy (Joel Kinnaman) becomes the first cyborg in OmniCorp's new wave of enhanced police officers, that the corporation hopes to 'sell on' to every city in the futuristic crime plagued United States. While I rarely see a Samuel L. Jackson film I don't like, even with Gary Oldman and Michael Keaton thrown in for good measure, I'm still not entirely sold.

Even the poster while a striking visual jarrs me. 'Crime has a new enemy' - RoboCop's not new, and to be honest, the original slogan, Part man. Part machine. All cop., is still pretty damn epic and could've been a nice homage to the source material.

Give the trailer a watch and see what you reckon.