SALES PITCH: The Top Selling Comics Of October 2013 And Those Past

With a gap of just .48% unit share between first place Marvel and nearest rival DC on the October 2013 sales charts, you'd think it was one of the 'Big Two' that grabbed the weeks biggest headline. Nope that honour goes to Image Comics, and more specifically Zombies. A war of them that took out the #1 spot on three separate sales charts; 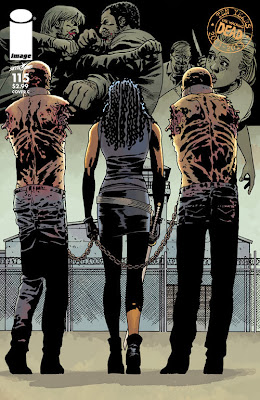 MY THOUGHTS: While being completely stoked for The Walking Dead team, I think it is a sign of the insanity of the world, that Sandman: The Overture #1 finishes outside the Top Six, at spot #8, behind titles such as Superman/Wonder Woman #1 at position #7 and Justice League. With news like that, It's easy to see why so many comic folk turn to a life of super-villainy.

Full October 2013 stats after the jump. 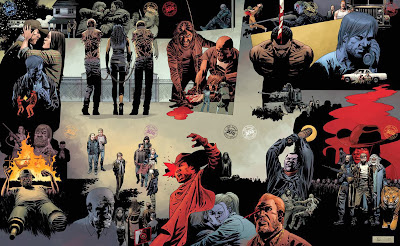 With ten variant covers forming one giant image, homaging it's 10 years in print, The Walking Dead #115 made a true milestone event.

Not only did the franchise top October comic sales, The Walking Dead: The Fall Of The Governor topped the Graphic Novel charts and The Walking Dead Series Four did likewise on the Action Figure chart list. A trifecta of #1's, proving the power of the walkers.

THE TOP COMIC OF OCTOBERS PAST:

Wayward Avenger, Hercules was all it took for X-Men #59 to take top honours in 1996. Tim Drake's Dad fought to the end in 2004's Identity Crisis #5 for the same result. Then in 2007, a symbiote story in New Avengers #35 should've been much more than it was, but still delivered a #1 result and a fantastic Halloween-ready cover by Leinil Francis Yu.