SPIRITS OF VENGE-INK: Ghost Rider Back Tattoo's Prove Fans Pride Of The Demon 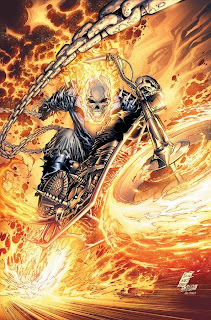 The main weapon in Ghost Rider's supernatural arsenal is his 'Penance Stare'. By looking into the eyes of the evil, he can make them relive the pain of their victims, compacted into seconds of hell.

Now at least two fans can prove they can take similar pain head on, having each had full colour back tattoos of the free-wheeling demon etched into their skin.

Take Marc Silvestri's iconic image of ol' G.R. there. As arresting as a comic cover as it is as a tattoo... 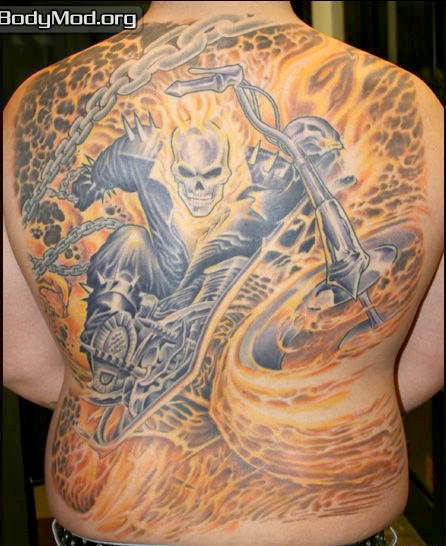 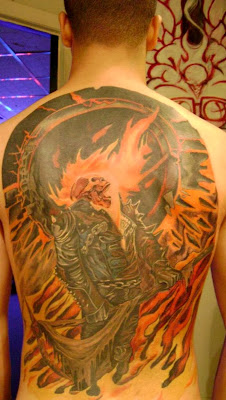 See, I'd sit in the chair wanting Ghost Rider, but when the needle starts humming, I'd want the Invisible Woman. Who's a chicken? Not this guy, he too went the full monty.

I wonder if Silvestri, or in this guy's case Marko Djurdjevic, ever see their professional artwork emblazoned permanently on flesh like this and what a tribute it must feel like to have fans that think that highly of your art.

Sure this guy took a little artistic license with the flames etc, but they don't look out of place. In fact if you never saw the original you wouldn't even know.

I guess that's the thing about Ghost Rider too. Comic fans will know the character instantly, but to Joe Public, who may have escaped the last two movies, tattoos like these would seem just standard (yet incredibly done) ink-art fare.