SWEET AS: The Best From IDW Publishing's February 2014 Solicitations

When we Kiwis find something we like, we say it's 'Sweet as'. From the X-Files team hunting Autobots to Jack Kirby's New Gods receiving an 'Artists Edition', when I look at the best and new releases from IDW Publishing for February 2014, these make the 'Sweet As' grade: 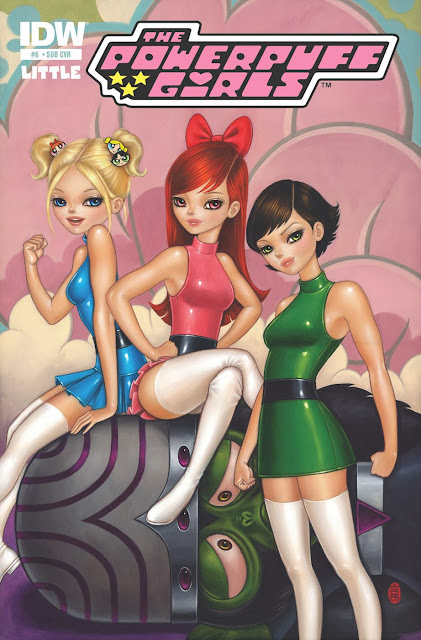 With a style not that unlike street-artist Misery, Yoon takes our favouritly functional Cartoon Network trio, and turns them into something else entirely - complete with an upsized Mojo Jojo!

IDW says: Cower in fear citizens of Townsville, for I, MOJO JOJO have returned! Not even your solicitation is safe from my influence, for I am all-powerful and supremely cunning. You have been chosen to bare witness to the ultimate destruction of Townsville - for such is my plan to demolish this wretched city once and for all, along with those annoying Powerpuff Girls! (W and A) Troy Little 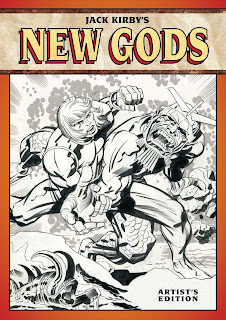 SOUNDS LIKE AWESOME:
JACK KIRBY'S NEW GODS ARTIST'S EDITION
Collecting issues 2 and 5-8 of Kirby's New Gods, nearly every page of this Artist's Edition has been scanned from the original art, and printed at full size for the first time ever! 144 pages, black and white. (W and A) Jack Kirby


THE REGULAR READS
TRANSFORMERS: MORE THAN MEETS THE EYE #26
Dark Cybertron part 8! Cybertron falls! The monstrous Necrotitan ravages the world, but is there anyone left to save it? Meanwhile, Ultra Magnus and his crew find something in the depths of the scarlet sea... (W) James Roberts and John Barber (A) Atilio Rojo, James Raiz, Livio Ramondelli 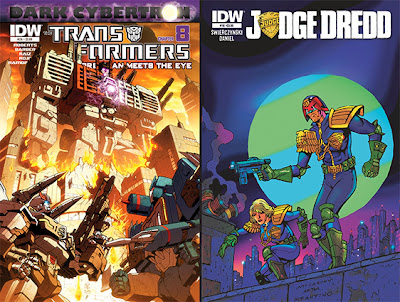 JUDGE DREDD #16
Twelve judges slaughtered by a masked maniac - the thirteenth in his sights. The only Judge who can stop him--Dredd--is a billion miles away. But it's not so much the number of dead judges, it's what's going to happen to their bodies... (W) Duane Swierczynski (A) Nelson Daniel


THE NEWBIES:  (aside from those named above) 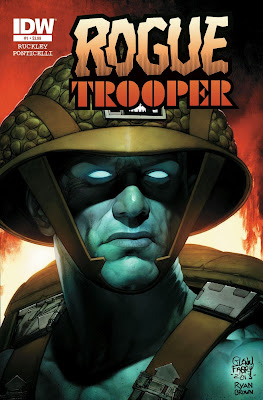 ROGUE TROOPER #1
Nu-Earth, just another planet ravaged by a galaxy-wide war, its atmosphere poisoned by chemical weapons. Created to fight in such conditions were the genetically engineered infantrymen. But now only one remains... Rogue Trooper. A new 2000AD all-new series! (W) Brian Ruckley (A) Alberto Ponticelli

THE X-FILES: CONSPIRACY: TRANSFORMERS
The Lone Gunmen's trail of secrets leads them to evidence of extraterrestrial life--mechanical extraterrestrial life! Will Optimus Prime and his allies trust these human interlopers in a secret conspiracy involving Cybertron? (W) Paul Crilley (A) Dheeraj Verma

CITY: MIND IN THE MACHINE #1
New from Darby Pop! Ben Fischer helped build the world's greatest surveillance system, Golden Shield, to battle crime. There is only one problem: Golden Shield can't work without a human mind to operate it, resulting in a controversial melding of man and machine. (W) Eric Garcia (A) Javier Fernandez 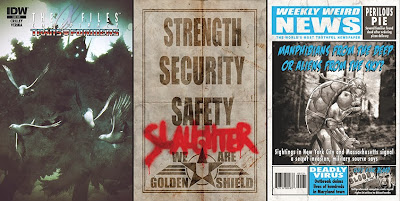 THE X-FILES: CONSPIRACY: TMNT
The Turtles are doing their best to avoid trouble, unfortunately, trouble finds them in the form of the Lone Gunmen! The fate of the world depends on the Gunmen getting the reclusive Turtles' help. (W) Ed Brisson (A) Michael Walsh

What do you think?  For the full list of IDW Publishing's February 2014 solicitations, click the jump.
Posted by IADW at 7:00 am