WISH EXCEEDED: Obama Cheers Batkid In Saving City And Damsel, Who Gets A Hug Too

On Tuesday the 5th, I told the tale of five year old Miles. A kid battling leukemia, whose Make-A-Wish was to be Batkid and save a San Francisco (turned Gotham) for the day. Last Friday Miles got his wish.

The dream granting organisation put out the call for volunteers to help, and with the day erupting across social media, as well as the White House, no one could have predicted how the world would respond to the plight of one brave boy. Here are a few highlights; 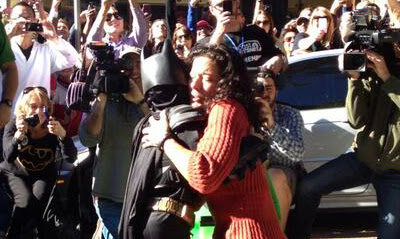 This is the damsel in distress Miles had to save from being tied to The Riddler's bomb, in the middle of the city's railway tracks. Showing the massive cheering crowd he can even improve on Batman's M.O., Miles gave the freed captive a Bat-Hug to help her feel better.

Make-A-Wish say over 13,500 people rallied to cheer the Kid Crusader on. Taunted by hilarious Tweets from The Penguin, celebrities also sent in support, everyone from Perez Hilton to the Harlem Globetrotters and U.S. President, Barack Obama; 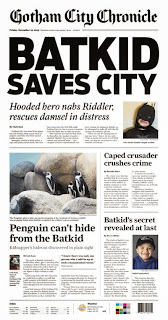 The San Francisco Chronicle even transformed their front page into the Gotham City Chronicle, the lead article on Miles was even cutely written by the secret I.D of DC's other main super-hero, 'Clark Kent'.

Showing playboy billionaire boys have good taste in cars too, Miles 'Batmobiles' for the day, were two jet black Lamborghini's sporting Batman logos. Accompanied by a police escort that blocked off traffic, they ensured Miles got to his destinations with plenty of time to spare, including receiving a Key to the City (albeit one made of made of Ghiradelli chocolate), from Mayor, Ed Lee.

While DC Entertainment seems to have missed a prime opportunity to do some good on the Coast they are shifting offices to, iconic Batman comic artist Graham Nolan did this piece of Batkid vs Bane to help support Miles in stopping the Penguin from kidnapping the city mascot Lou Seal and The Riddler from robbing one of the cities main banks. 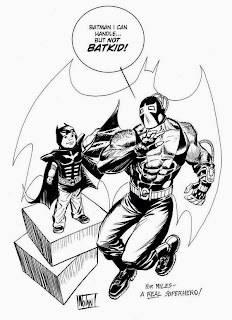 With his whole family in attendance, including Gran, and his little brother dressed as Robin on the sidelines, the day is unbelievable to view even from here in New Zealand.

From Brazil to Asia, to see the massive global outpouring of support, homemade signs and more on Twitter for Miles click here, or for the amazing photo gallery from the day visit Instagram. Here are just four of what you'll find; 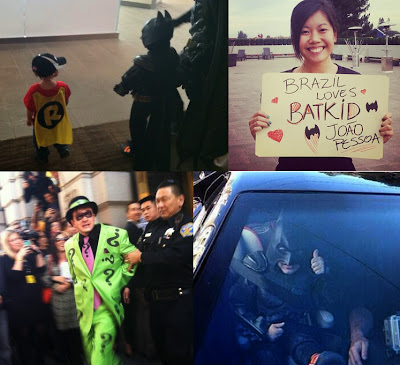 It is stunning the effort so many people made (especially Make-A-Wish San Francisco Bay) in uniting for a positive cause. One cause that makes many other 'issues' seem trivial. To hear Miles explain 'Why Batman?' in his own voice, click play below;