300 VS THE SINISTER SIX: New Trailers See Spider-Man Be Cap And Spartans Be Spartan 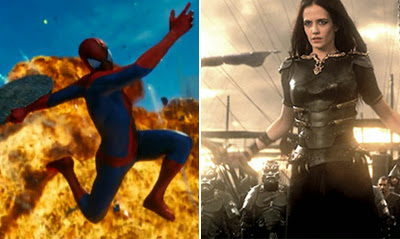 Just like in the movie Gremlins, how you could never get them wet or feed them after midnight, least they start multiplying beyond all control, comic-book movie trailers rarely get to debut by their lonesome anymore. Especially around Christmas.

Before you get preoccupied trying to wrap unwrappable presents or rounding off the year that was, Sony want to release their newest trailer for Amazing Spider-Man 2, so you still have enough free time to catch all the Sinister Six cameos inside. Take a look:

Did you catch the Vulture wings and Dr Octopus arms? Add to that Electro, Rhino, and the Green Goblin and that leaves just one spot remaining. Who do you think that will be?

Not to be outdone in the counting game, 300: Rise of an Empire debuts its latest trailer, where a few more than 300 Spartans war with Greece;

For me of the two, that's the winner. Least of all for Eva Green. She was sensational in Casino Royale, and her inbuilt style of delivery makes her a perfect cast for the wicked Artemisia - luckily she's also been scooped up for fellow upcoming Frank Miller based comic film, Sin City: A Dame to Kill For - double score!