In concept it's flawless - a packaged show, hosted by Stan Lee, where the first cartoon is based around The Fantastic Four and the second half, the adventures of The Invincible Iron Man. However, despite the runaway success of Fox's X-Men and Batman: The Animated Series, the powers that be decided to initially row this boat's tories and art towards a younger audience, with results to match. 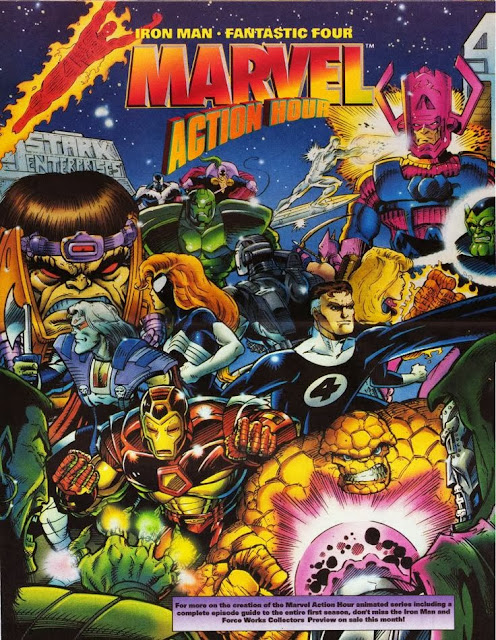 Given a second shot, a revived Marvel Action Hour put on an all new suit of armour and came out ready for battle, like it should have the first time. Stan Lee's intros were shortened, hot new intro sequences were given to each feature and more mature writing and art overhauled both segments. These were the first two comics I ever subscribed too, and finally, their time had come.

Iron Man now belonged to Koko Enterprises and as a result opened with the below blasting electric score, roaring behind a Tony Stark forging his new destiny in a fiery furnace. With many stories lifted from the pages of the Force Works / Avengers West Coast and Iron Man comics, solo tales were replaced by engrossing ongoing plot threads.

Stark having faked his death, found himself kicked out of the team, with only Spider-Woman and War Machine remaining by his side. This allowed Stark's in-comic rivalry with Hawkeye to develop and although his redesigned armours were all killer, it was a pity the attitude of U.S. Agent never popped up, especially as M.O.D.O.K. and Ultimo surfaced.

Capping off the final episodes, Mandarin had collected his scattered power rings over the season and used them to render all technology inert. Forcing Force Works to reunite, this plot was well-timed, as it paralleled the surrounding 'Iron Man family' comic crossover, Hands of The Mandarin - right down to the foe's unmasking of Tony Stark! 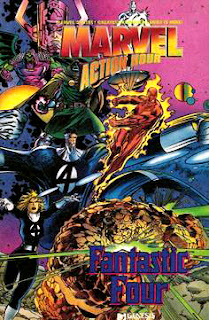 The Fantastic Four by contrast was revamped to showcase exactly how wide-ranging the length and breadth of Marvel's launchpad title was.

The Four's rogues gallery, unique locales and allies all got mined for gold in equal portions. This meant fans and newbies alike were treated to Wakanda, The Great Refuge, Black Panther, Malice, The Frightful Four (Wizard, Medusa, Hydro Man and Trapster), and even an Iron Man morphing Super Skrull - with Lyja Laserfist leading his army!

Not only did the revived Fantastic Four air classic comic plots such as Johnny dating Crystal and Frankie Raye becoming Nova, Herald of Galactus, it featured a variety of other heroes befitting a core Marvel title. Thor, Daredevil, Ghost Rider and Hulk guest starred - with Doctor Doom even jumping over to the latter's own series in return!

Why Ghost Rider never did that in the comics I'll never know...

With War Machine also dropping in on Hulk and Iron Man in Spider-Man, it really showed these revived cartoons were making the most of an uncertain future. While neither was renewed a third time, looking back, Marvel's first shared on-screen universe was right here.

Did you know?  A third season of Fantastic Four had made it to the planning stages and was going to tackle the Invisible Woman's pregnancy. This would allow the new crew their shot at Namor and bring both Medusa and She-Hulk in to fill Sue's slot on the team.