CRISIS ON INFINITE PULL-LISTS: Why DC Comics Needs It's Bullet Back

This post is hard to write, but I blame it on the end of the year. As I look back with the season, I can't help but notice that New Years 2011, I collected nineteen of the new promise DC52 titles, and as we step into 2014 I collect one. I feel like I'm forced to turn my back on my home away from home, and I want to explore why. 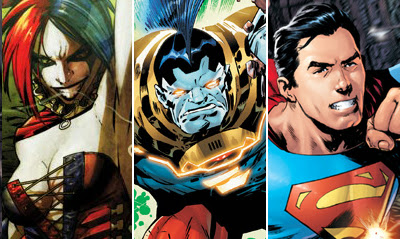 IT'S WHAT YOU DO THAT DEFINES YOU I'm sure many marketers, accountants and other folk earned a decent beer putting the DC52 together, what I don't understand is 'why?'. Mark Waid once said about JLA: Year One "We don't have to be ashamed that DC has history". That sentence summarised a revival of the original universe, lead by books that relished its truth like Starman, The Flash and JSA.

As an advertising dude by trade, it is a core question I've been trained to ask of any new client / product 'What is your point of difference?' What set DC Comics apart from all it's rivals was 'legacy'. One word anchoring an entire line, albeit in different and creative ways. Now DC is not only without a Starman, Wally West, Justice Society, James Robinson or Mark Waid, the formerly new 52 doesn't have a defining point to base itself from. Unless you count gimmick covers.

The fact that an unveiling of a series of 3D covers seemed to eat up the years marketing budget, while Jonah Hex and Swamp Thing virtually banged tambourines for attention, shows the 52 focus is now on spectacle over substance, and frankly, that should never be a trait of DC Comics.

THE NEW DC - THERE'S NO STOPPING US NOW When that line filled the publisher's barcode boxes back in the day, DC was reinvigorating its entire line in waves, fuelled by books such as The New Teen Titans, Crisis On Infinite Earths and more. Shaking up the range with 'DC52' had equal potential. Freshness could be injected, concepts like Mr Terrific could get a well-deserved solo shot, and various Pandora appearances hinted that a line wide unified direction (something missing since the lead in to Infinite Crisis) might also return.

Alas, in the execution, the baby was thrown out with the bathwater - and no one noticed, because Superman was kissing Wonder Woman. 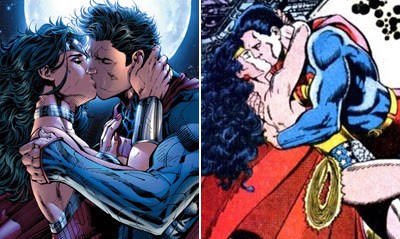 Sure Amanda Waller decreased the fuller-figured super-heroine population and Harley Quinn made even Avengeline blush, but at the end of the day the tonsil hockey of the two icons is the lead 52 change that couldn't have occurred in the old continuity. Reason being it repeatedly already had. Most notably in the reboots of George Perez's Wonder Woman and John Byrne's Superman, post the original Crisis.

Yes, Perez's Wonder Woman run 'DC52ed' the old continuity of that character, but with the support of the DCU titles around him (no doubt backed by the fact his editor was Vertigo Queen and Kingmaker, Karen Berger) George was given the space to do his thing, and in return provided one of the best works of his career. 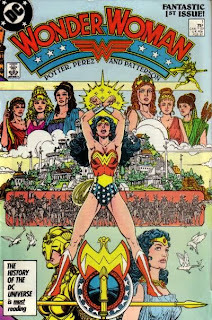 I would rather encourage new fans to pick up trades of this work (or Kingdom Come etc), if interested in seeing a clay and Kryptonian DNA swap, while my creatives and I got on braking adventurous new ground in the existing continuity, rather than charge them $3.99 a rebooted instalment to sit through history repeating.

THE OUTSIDERS: Readers of Detective Comics pre the big bang know writer Scott Snyder already had Batman booked for a flight back into the top sellers list. DC's overall sales figures now rival industry leaders Marvel, but in titles, the 52 divide between the rich and poor is greater than ever.

Artists seem employed on an ability to draw like the legendary David Finch, and the hot variety of the 52's characters and genres has drastically dwindled away, spreading confusion to the remaining line. The DC52 needs a Geoff Johns 'Sort, Bin, Explain and Highlight' rinse and it's still in nappies. Ironic, as it is applying this formula to a whole universe at once that birthed the 52 in the first place. 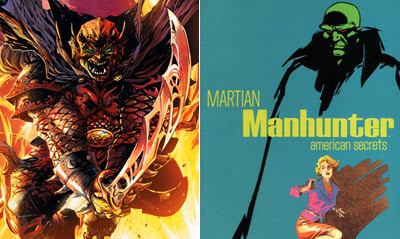 If giving the likes of Etrigan The Demon their own series was a risk before, what is it now fans don't know if the history that made them fans is still relevant? If newbies think the New 52 may still have old strings attached? Or the continuity phobic folk the whole 52 seems created to appeal to fear the continuity the era has now grown?

Me, I've never seen much Dr Who. So while Whovians may get a bit more of the plot in the latest series, we all run around yelling 'Exterminate!' afterwards, so it's win-win. If I want to research I can. Same shoe, other foot; I love me some J'onn J'onzz, but I'm sure new fans can enjoy tales without worrying about shout-outs to the sublime Martian Manhunter: American Secrets. Yessiree, Hot Chocolate was right, everyone's a winner baby,... unless you're from Wildstorm. 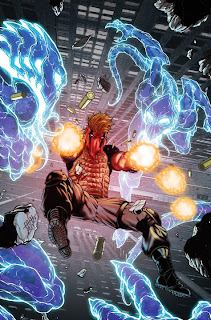 Once the bookie's favourite to independently become 'Publisher #2', Wildstorm was like Valiant is. It's heroes and anti-heroes exploded from the action / sci-fi side of pop culture, rather than the super-hero, and now all find themselves lost in one that is the reverse. One where their continuity has been binned and they now stand in an appearance queue behind the 365 other DC vigilantes who have the word 'Gotham' in their resume.

YOU DON'T KNOW DICK: Speaking of Gotham, in closing let's take the true third of DC's Trinity to the mass public, original Robin, Dick Grayson. Grounded by his fellow Titans, Dick passed on their humanity as the inspirational big brother of future generations, highlighting to their 'authoritarian parents' that their ways weren't always best. Tell me, does that theme need retouching?

Proving answering 'yes' doesn't instantly lock someone in Arkham, DC52 did that and worse. They removed Grayson's foundation of respect and resultant authority, by having him bail on the Robin gig after only a couple of years, and made his crowning achievement being unmasked after becoming a moral-free Justice League's piñata. 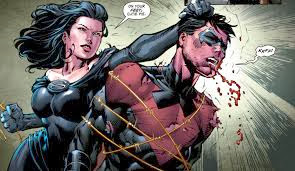 Yet oddly enough, it's because fans still gave Nightwing his pre-52 standing, regardless of what's published, that the events of Forever Evil resonated like they did. Had the event happened in the old DC, with the character's status still deserved, the whole event would've had a lot more gravitas, not to mention a few more hands clapping.

DC, despite jabs from outsiders, was never an outdated one-horse town. It has the greatest concepts in comics, ones that don't need talk show hyperbole to sell themselves. Sure, as fads break the odd fan may be lured away, but you only need be a few days old to know there's no place like home. Homes away from home included.