PANEL-BEATER My Comic Of The Month: The Sandman: Overture #1

Right from the Dave McKean cover on shiny cardstock paper, The Sandman: Overture feels like all you selfishly hoped for for Christmas, minus the socks from Nan. 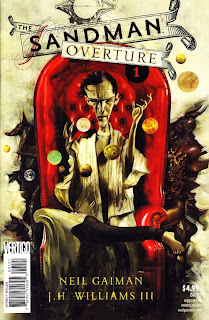 The fantasy of writer Neil Gaiman returning to script the lives and afterlives of The Endless, joined by the surreal artistic skills of Promethea artist J.H. Williams III, and edited by Vertigo 'Mum', Karen Berger, may have been so strong, many fans may well pinch themselves for holding this issue in their hands.

Despite its creative team or content, this new-reader friendly comic is a dream no longer - although you'll need to remind yourself of this fact more than once when reading through its riches.

All-star creative teams have led to nightmares before, yet those past cases are quickly forgotten, as your mind tunes in to savour the words of a writer who talks higher than many comic writers dare, yet not down to or above his audience.

More than respect, like Chris Claremont, Gaiman delivers your moneys worth of words (a fact that still holds, even with a price tag of $4.99 US). Yet where Chris uses the content space to add drama directly to what is seen, Neil wickedly crafts these amazing tangents which may or may not have ulterior meaning, and may or may not affect the central plot, yet all add to the reading experience in ways that would make the journey poorer if ever made absent.

"Small, mindless, insect-like creatures who swarmed, when the mood took them, taking on shapes capable of making art or exploring the solar system, until they fragmented back into tiny flying cells interested in only egg laying and food…." Talent like this rarely needs images, but J.H. Williams III is the perfect man to equip if you try. 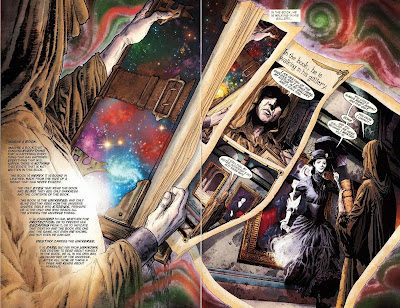 As the death of one of The Endless happens just a few pages in and time slips to the London of 1915, Williams keeps pace. His page layouts seem surreal in their creativity, dreaming and reality blur - making 'ads' seem even more of an intrusion than usual.

Are the stereotyped English teeth of a generation the reason for the double page spread of the Corinthian's first steps into the tale or merely a way to allow the readers to see events through the ghouls molecular vision? Adding to a script does not do this man's efforts justice. He almost outshines Neil, of course given the leash and lead with which to do so.

The man connecting word with art with audience, is colourist Dave Stewart. Versed in the paranormal through his work on Hellboy, as Destiny and Death mourn, and the man who when dreaming is most definitely not George Portcullis tries to help Daniel get the affairs of his office in order, Dave almost invents new colours and wears old ones out in holding up his side of the bargain. Sandman's descent to his castle a perfect example of this; 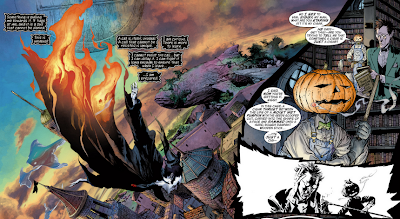 Where in prior pages, the bad guy stood in white, the hero in black, his faceless assistant in shades of grey, as the Dream merchant attempted to end his Pinocchio's wish of being a real boy / bloodthirsty, nomadic spirit named 'Corinthian', Sandman now finds himself pulled away across time and space. Landing in a recurring state of being, it is one that puzzles a Daniel who has witnessed every dream of heaven and every pictured hell - and this Dan as well.

While the answers will now be an infamously fair wait away, the memories of how great the Neil Gaiman Sandman socks feel to wear have held to be true. More so than Watchmen, the original Sandman run encouraged an entire industry to dream higher. 25 years on with just one issue released, it still provides that incentive.