SWEET AS: The Best From IDW Publishing's March 2014 Solicitations

When we Kiwis find something we like, we say it's 'Sweet as'. From the 200th issue of G.I. Joe: A Real American Hero and the debut of Rocky and Bullwinkle, when I look at the best and new releases from IDW Publishing for March 2014, these comics make the 'Sweet As' grade: 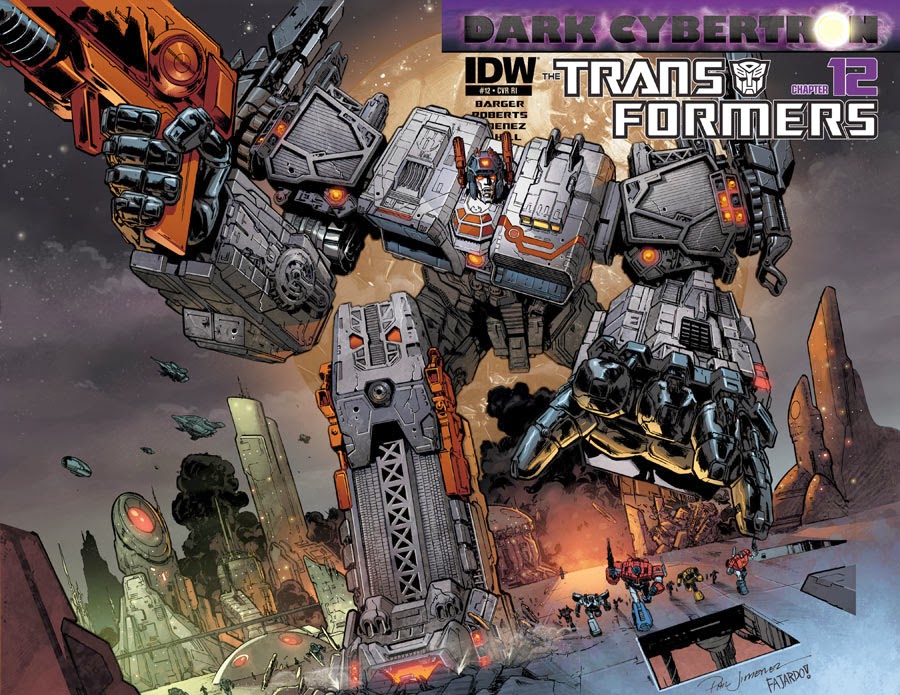 As awesome as Metroplex is here rendered by Phil's usual detail level, it makes you think 'Couldn't this guy win the war on his own?' 'Megatron's at it again, Metro man, go stop him. Jazz and I are gonna have an energon beer and talk football. Cheers - Prime'.

IDW says: This issue is as big as they come. It’s all come down to this - every scheme, lie, moment of heroism, rivalry, every relationship... if Cybertron falls, so falls the universe! (W) John Barber and James Roberts (A) Phil Jimenez and Brendan Cahill 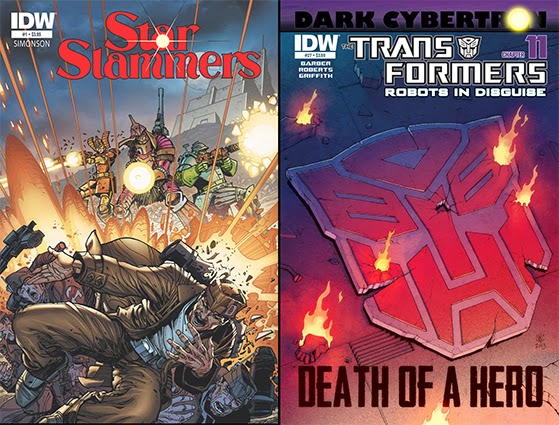 STAR SLAMMERS: RE-MASTERED #1 Before Walter Simonson's groundbreaking runs on Fantastic Four, Orion and Thor, there was Star Slammers. A race of men who could out-shoot, out-fight and out-kill anybody. The most successful mercs/ businessmen in history, The Star Slammers reassemble here, completely re-mastered, re-colored and scanned from Walt's personal archives. (W and A) Walter Simonson

JUDGE DREDD #17 Dredd’s most vicious enemies—the Dark Judges—are clawing their way into Mega-City One, determined to transform it into a new city of the dead. The only thing more horrifying than the Dark Judges’ onslaught are measures the Justice Department is willing to take to repel them. (W) Duane Swierczynski (A) Nelson Daniel 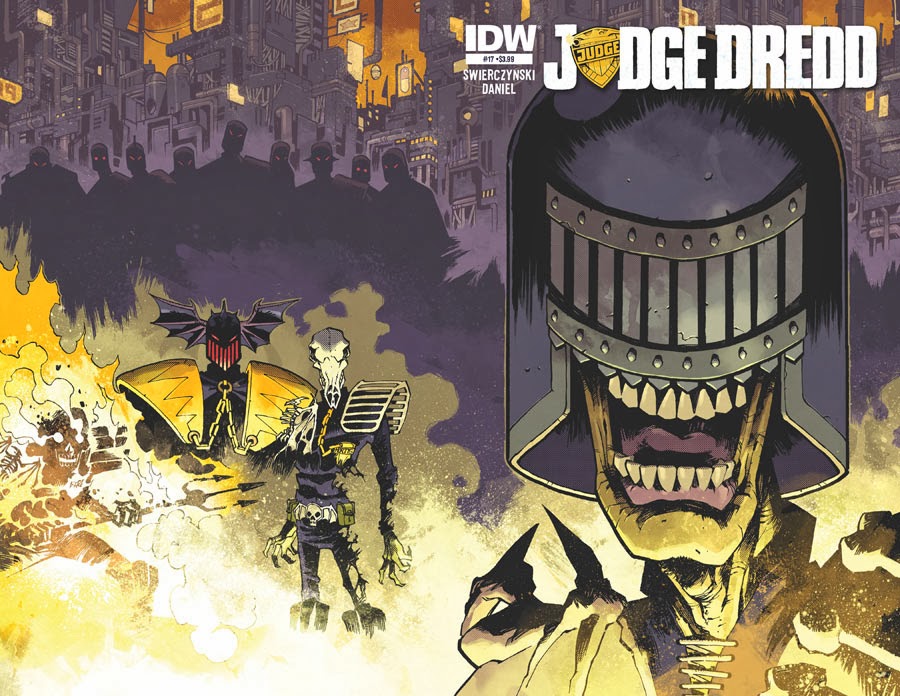 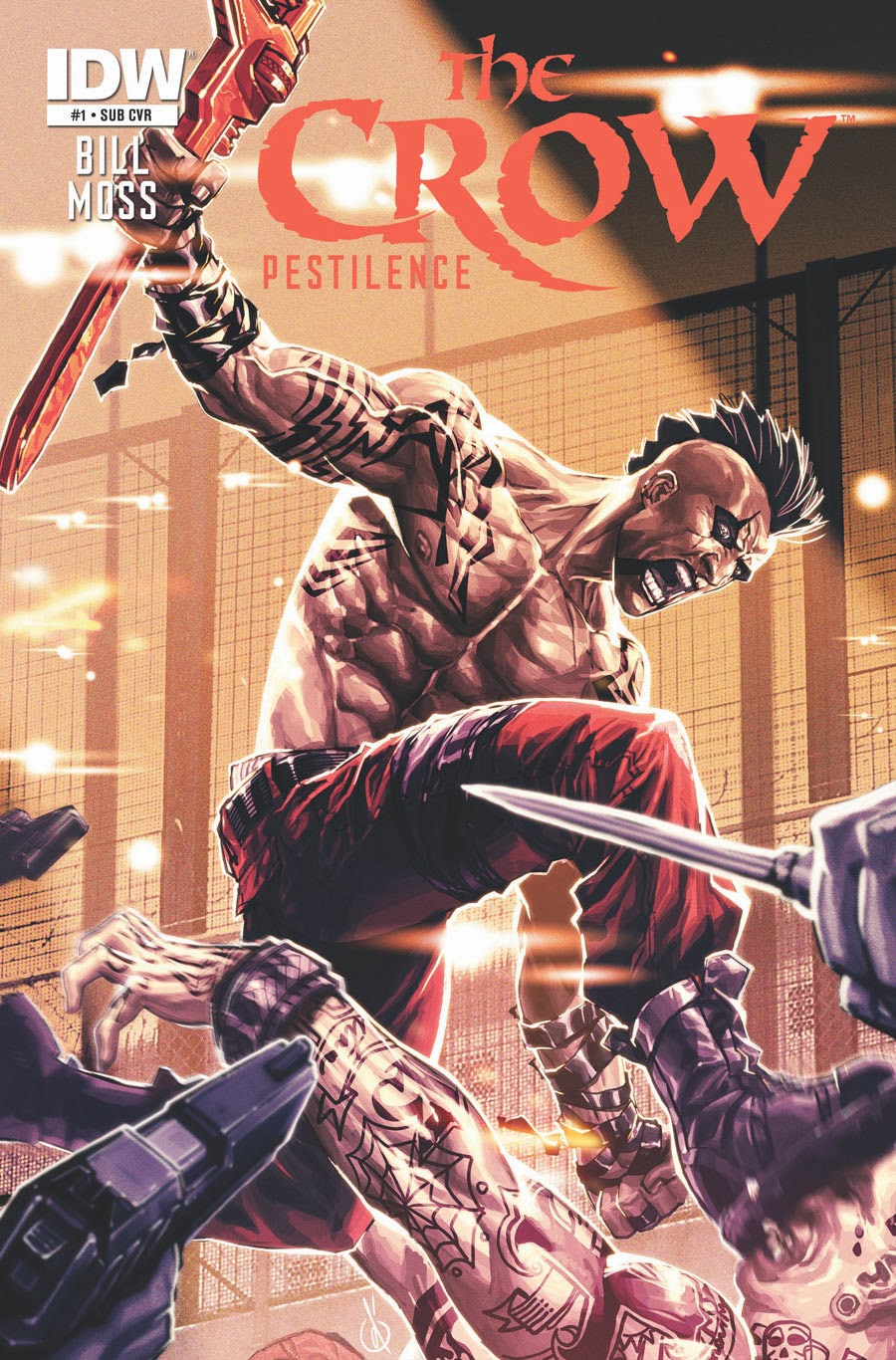 THE CROW: PESTILENCE #1 (of 4) In Mexico a young boxer, Salvador, refuses to take a fall after accepting a vicious gang’s pay-off. When they take their lethal revenge on Salvador's family, he returns as The Crow, looking for vengeance…and forgiveness. (W) Frank Bill (A) Drew Moss

CHARLES SCHULZ'S PEANUTS: ARTIST'S EDITION Charles Schulz's Peanuts transcended the medium, presenting complex issues in the space of four panels, while maintaining a biting sense of humor. Charlie Brown, Linus, kite eating tree, the Great Pumpkin, Snoopy and more, are embedded in our psyches, and now, for the first time, Schulz's classic will be presented as close as possible to the original art.

Each strip has been carefully scanned and reproduced in colour, showing the black and white art, paste-overs, blue pencils, editorial notes and art corrections! 144 Pages (W and A) Charles Schulz 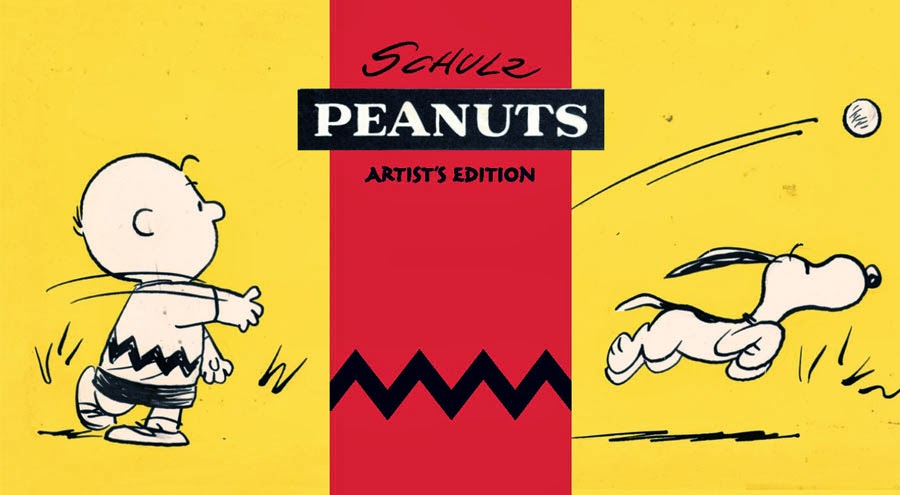 ROCKY AND BULLWINKLE #1 (of 4) Welcome Bullwinkle the Moose and Rocket J. Squirrel back to comics! Now the duo must stop the evil Boris and Natasha from duping a wealthy philanthropist! (W) Mark Evanier (A) Roger Langridge

THE X-FILES: CONSPIRACY: THE CROW Bernard, a state policeman and his partner, have their romance brutally cut short when both die after a high-speed pursuit involving the Lone Gunmen. Bernard awakens to find himself resurrected by an otherworldly crow and one thing on his mind: vengeance. (W) Denton J. Tipton (A) Vic Malhotra

MONSTERS AND MADMAN #1 (of 3) Contrary to popular belief, the story of the Frankenstein Monster did not end at the end of Mary Shelley's famous novel. Now, uncover the shocking meeting of the Monster and Jack the Ripper. (W) Steve Niles (A) Damien Worm 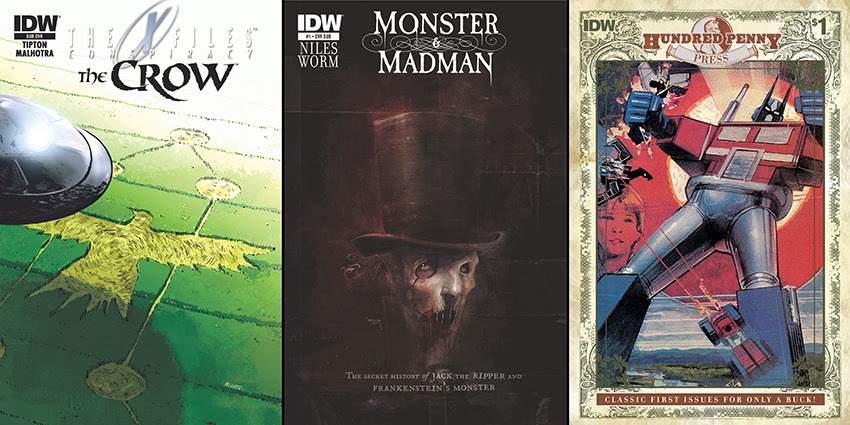 G.I. JOE: A REAL AMERICAN HERO #1 (1982) Cobra Commander has abducted a controversial scientist that could spell doom for America! It’s up to G.I. Joe to rescue the doc, in the issue that started it all, for only a buck! (W) Larry Hama (A) Herb Trimpe

TRANSFORMERS #1 (1984) See how the epic began, for only a buck! The Autobot vs Decepticon war spills onto Earth! (W) Bill Mantlo and Ralph Macchio (A) Frank Springer

What do you think?   For the full list of IDW Publishing's March 2014 solicitations, click the jump.
Posted by IADW at 3:00 pm