GALAXY SHIFT: Star Wars To Return To Marvel Comics In 2015

You didn't need to be one with the Force to know Marvel, now owned by the House of Mouse, would eventually take back the Star Wars comic license from Dark Horse, once Luke, Vader, Maul and Chewie were also acquired by the Disney empire. Still as it happened today you couldn't help but be a little stunned. 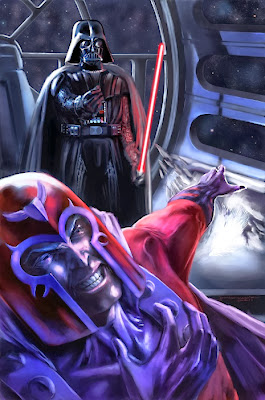 On the plus side, we may get to see some of the great artists tied to Marvel finally get the chance to render Lando, Boba Fett and co. Simone Bianchi is just one whose unique style would make for a stunning read. Writers like James Robinson and Jonathan Hickman could also write scripts that open up endless new ground, within one of pop's most globally recognised and enduring franchises.

While a Marvel crossover, the likes of which deviantARTist artist Jonathan Moore teases with the piece on the left, is now also a distinct possibility, thoughts do go out to Dark Horse, who have set the standard for how well and respectfully licensed comics should be treated, proving the term doesn't have to be a dirty word.

Props go to Carol Roeder, director of Lucasfilm franchise publishing, for taking a moment in Marvel's official press release to also acknowledge the incumbent's success “Dark Horse Comics published exceptional Star Wars comics for over 20 years, and we will always be grateful for their enormous contributions to the mythos, and the terrific partnership that we had.”

This in large part is due to the efforts of writer John Ostrander. The work the Suicide Squad veteran has done throughout the Dark Horse era has hopefully gifted him with as much Obi-Wan status in the Star Wars fan community as he should have walking within the comics one.