Making A Mark gives an insanely talented artist some IADW brag-space. Today goes to indie comic artist Valerio Giangiordano. This Italian's detail and eye are equally stunning to behold. Having worked on Bluewater's Fame: Danica Patrick and Arcana's Interagents, his climb to the top of the comic book ladder has only begun.

A test on his ability to colour digitally, the pencilled version of Valerio's Cyclops is here. With a strong Simone Bianchi influence to it, the most featured hero in Giangiordano's portfolio actually looks like a leader of x-men!

Having just celebrated his birthday a few days ago, Valerio has had plenty of reasons to smile. His Joker sketch takes smiling to a whole other level, proving the Clown Prince of Crime is always a tad scarier when rendered in a fine art style! I dig how messy the Joker's lipstick is - it's a small thing, but a leader of the insane such as he should never put his make-up on perfectly. Plus Valerio makes a chin of Jim Aparo proportions seem natural - nice work! 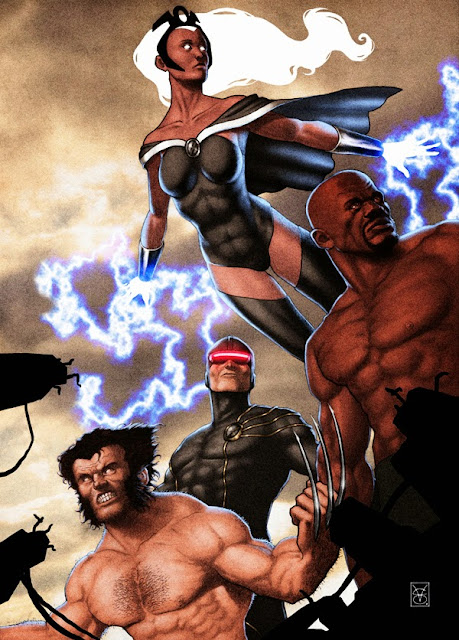 After seeing a pose of Spider-Man by icon Stuart Immonen, Valerio chose to re-draw the image with his own flavour of pencils and colours, creating a piece just as striking. The way that sun also creates a spider-sense of sorts is really smart stuff!

After taking a break from drawing for a few months, Giangiordano retrained his hand with this piece starring Luke Cage and the X-Men! As you can see from the pencil version here, his skills with anatomy were always present, but the lightning bolts he added in the colouring stages really set the piece off!

Cyclops looks every bit the leader he did in his solo shit, Wolverine his usual feral self, and while Cage looks typically mean (and possibly naked), it's the soft body language of Storm and her detail free hair disguising her power, that really gives these heavy hitters their punch!

What do you think?  To see John's full gallery and the likes of Hellblazer, Death and Hulk, click here, or to visit him on blogger, click here.
Posted by IADW at 7:00 pm