Mark Millar's opus Civil War, may have divided fans as much as it did the bedrock of Marvel, however few can deny the gut-punch of it's opening salvo. Indeed the spark of the mini-series' first issue was no mere match. It was a jet engine firing on all cylinders - and surfing it all the way to Kick-Ass Hall of Fame-ery was Steve Rogers himself.

Summoned to the Helicarrier, Maria Hill is keen to see if Cap feels the super-heroes gathered in the Fantastic Four's HQ are going to side with Tony Stark's new Superhero Registration Initiative. Steve responds; 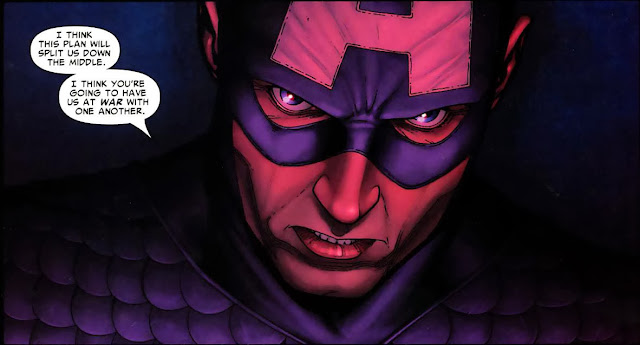 This was one of artist Steve McNiven's first gigs post the halls of CrossGen, and that stare shows in one frame how far he'd honed his craft while inside their now defunct walls. Not understanding that is 'Cap' for 'turn your Hellicarrier round before I bring it to the ground' Maria continues her evaluation of the scenario. Counteracting Steve's assessment that the main opposition will come from street level heroes like Daredevil and Luke Cage she retorts "So know one you can't handle?" As the Living Legend of World War II is stunned at her gall, Hill is about to learn no-one should take the Sentinel of Liberty for granted. 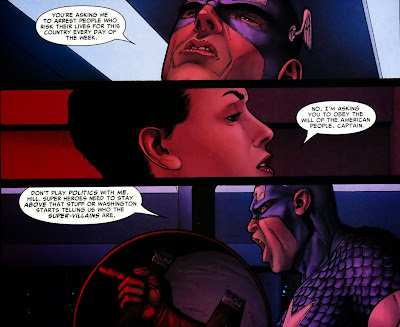 That last line is one relevant to today's world, where so many seem to decide who is 'evil' by the words of newsroom editors or governments without researching further than a three-minute soundbite. In the Marvel U, it's a line that could only resonate spoken by Captain America.

Note, colourist Morry Hollowell keeps the colours of this clash of patriotism to red, white and blue. That is talent folks.

As the room fills with S.H.I.E.L.D. Agents taking aim at the man in stars and stripes, Cap orders them to stand down. With Maria reinstating that "Captain America is not in command here" Rogers dams her for what he is about to do. That 'do' is kick ass as only a man schooled in hard-knocks can do. After taking out a dozen or two, Steve tires in taking out grunts for no effect and changes tact; 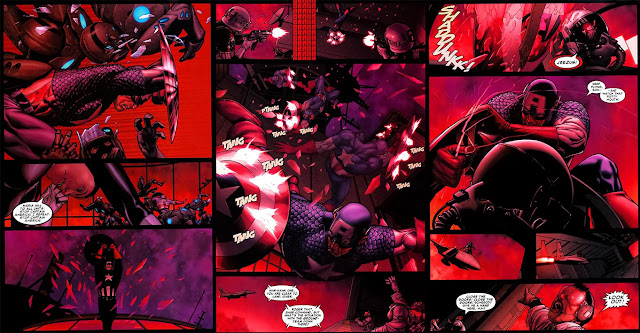 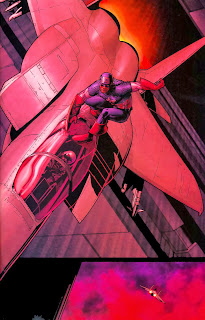 Remember to click to enlarge these pages peeps, squinting is hell on the eyes! The moment of the moment is on the right above, where in the large panel Captain America reminds the pilot to watch his potty mouth. That highlights the crux of the character, playing off his traditional values.

Many people write Cap off as a lapdog to the White House, but in my eyes he is anything but.

He's a man out of time who finds the American Dream he holds onto is one few have the faith to see anymore - and one that is vastly different from that which has arrived. This puts him at odds with politics and corporate brands turned super-powers. Making him a man, super-soldier or non, living unflinchingly in the shadow of the expectations people have of him.

While he may not ride a jet fighter in and out of every battle, when the just or justice is threatened, as Civil War did, Captain America and his mighty shield will be there, ready to do what needs to be done. 'Nuff said.