Today's cosplay feature is brought to you by the letter 'S'. You've got to hand it to 'S' - it's a great letter. It is always handy in a game of Hangman, brings us both daytime and nighttime 'sports' and starts the surname of Springfield's most famous family. In comics, it helps Billy Batson be a better man, gives Susan Storm a sense of identity and labels the top icons of the 'Big Two' publishers. Oh yeah, and when it comes to cosplay, it gives folk ideas like these.

'Static' is more than just bringing the talents of the late Dwayne McDuffie and artist John Paul Leon to life, Static Phenom is creating what he hopes will be a series of Static Fan films, with the first on YouTube already. If you are a Static cosplayer too, he wants to hear from you!

Right now I am re-reading 90's Spider Man comics inked by Bill S, starring The Scarlet Spider. I swear each page makes me wish Bill had as many gigs inking as he did illustrating. The work is outstanding. Here, similar hyperboles are needed for this guy's Scarlet Spider gig - like with Bill's work, suddenly the hoodie doesn't seem so out of place! 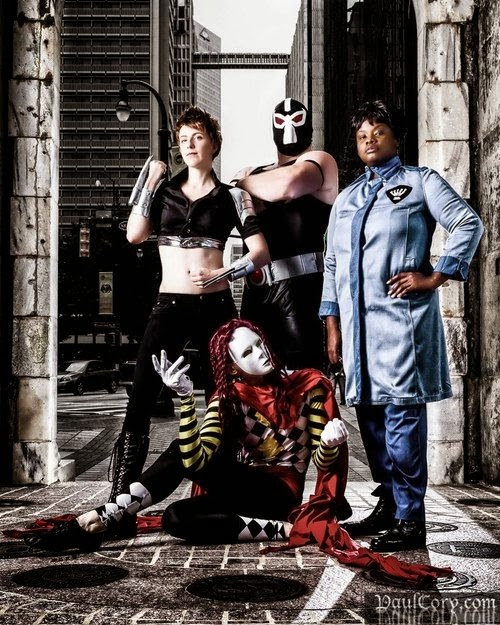 Retro fabric helps time displace this Adam Strange. Sure 'Adam' doesn't start with 'S' but 'Strange' does, along with 'space', 'space-gun', 'spaceman' and 'space-it's-my-site-I'll-cheat-if-I want to'.

One force in comics who can't stand cheaters, and proves 'S' stands for darker things than hope, is Amanda Waller, The Wall. Whether you end up in Secret Six or her Suicide Squad, she has you in her sights - and that's the last place on earth anyone, even Batman wants to be.

Photographed by Paul Cory, Bane, Ragdoll, Scandal Savage and Amanda here, make for a photo so powerful and striking, you'd think it was a press image for an upcoming Secret Six movie or TV show (guess we'd have to get the comic up and running again first - if the Six exist in the DC52 that is).

Ragdoll suddenly goes from being comedic relief to a little-too-spooky in the above, but that is just brilliant cosplay at work. The power couple look even more of a match than they ever did in print, and yeah, you really don't want to mess with the Wall, which is just how it should be.